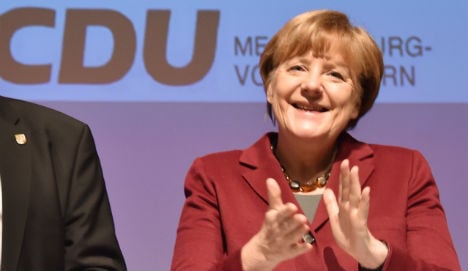 Angela Merkel made the prediction at a meeting of her CDU party in Western Pomerania. Photo: Bernd Settnik/dpa
Merkel's open-door policy, while initially winning praise last year, has come under mounting criticism, especially after the German city of Cologne was rocked by a wave of sexual assaults on New Year's Eve blamed on migrants.
“We expect that once peace has returned to Syria, once the Islamic State (group) has been defeated in Iraq, that they will return to their countries of origin, armed with the knowledge they acquired with us,” Merkel said a
regional gathering of her Christian Democrats (CDU) party in the state of Mecklenburg-Western Pomerania, according to news agency DPA.
She cited the refugees from former Yugoslavia as an example, saying that 70 percent of those who arrived in Germany in the 1990s returned home once it was safe to do so.
Germany took in more than 1.1 million asylum seekers last year and more are arriving on a daily basis, despite the hardening mood among Germans.
Interior Minister Thomas de Maiziere told German weekly Der Spiegel Saturday that on average, 2,000 migrants had entered Germany per day in January, which “projected over a year would still be very many — too many”.
Support for German Chancellor Angela Merkel's conservative alliance has slumped to its lowest since July 2012 as opposition over her liberal refugee policy grows, a survey showed Sunday, while a right-wing populist party polled a record high.
According to the poll published by the Bild am Sonntag newspaper, public support for Merkel's Christian Democratic Union and sister party Christian Social Union now stands at just 34 percent, down two percentage points.
The Social Democratic Party — the junior partner in Merkel's left-right grand coalition, has also lost ground, shedding one percentage point to 24 percent, according to the poll of 1,638 people conducted from January 21 to 27.
Meanwhile, the populist Alternative for Germany (AfD), which on Saturday sparked a storm by suggesting that police should be allowed to shoot migrants to stop them from entering Germany, scored a record 12 percent, gaining two percentage points on a similar poll published a week ago.
Founded on a eurosceptic platform, the AfD has gone through a leadership split and veered further to the right, with some of its leaders voicing support for the anti-Islamic PEGIDA protest movement.
With 1.1 million asylum seekers arriving in Germany in 2015, concerns are growing over the country's ability to integrate the newcomers.
After a decade in power Merkel has come under fierce pressure to review her open-arms approach towards those fleeing war, with emotions heightened after a rash of sexual assaults in Cologne on New Year's Eve police blamed mostly on North Africans.
While Merkel does not face national elections until 2017, regional elections in three states in March will be a key test of support, with the AfD hoping to pick up seats at her party's expense.
A poll published Friday by news weekly Focus found that 40 percent of respondents want Merkel to resign.
Nevertheless, a subsequent poll commissioned by Focus found that, with 41 percent, Merkel came in top as the politician whom the public believe can best manage the migrant crisis.