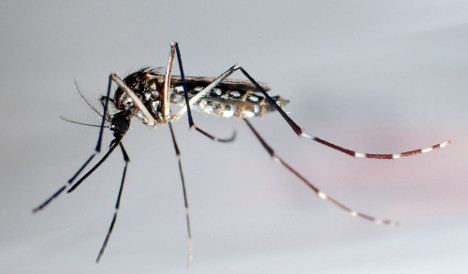 Both the World Health Organization (WHO) and the German Robert Koch Institute reported recently that two cases of the Zika virus were identified in Germany in December.

The Robert Koch Institute, which is responsible for disease control and prevention in Germany, confirmed to The Local on Thursday that two Germans who had returned from Haiti had been diagnosed with the virus.

The WHO reported that the cases had been reported in late December and confirmed by laboratory testing.

The Zika virus is transmitted to humans by the Aedes aegypti mosquito, most commonly found in North and South America.

Alarm has been raised worldwide since a massive outbreak started last spring in Brazil.
Symptoms tend to be mild, including a rash, fever and headaches. But experts have observed a potential link between pregnant mothers with the virus and their babies being born with brain damage.

There is currently no vaccine.

The WHO has said that the virus could spread across the Americas through the mosquito.

But a spokeswoman from the Robert Koch Institute told The Local that those living in Germany should not be worried about a spread because the virus is transmitted by the mosquito and not from human to human.

“This is not an issue in Germany,” said the spokeswoman. “The mosquitoes are not in Germany and it would be extremely difficult for them to come.

“We can't rule anything out, but it would be very, very, very unlikely.”

But that hasn't stopped certain English-language media from reporting that the virus was “spreading” after being found in Germany.

The risk, if any, to Germans is to those travelling to countries known to have the mosquito. The German Foreign Ministry issued a statement in December saying that pregnant women “should not if possible make unnecessary trips to areas of the Zika outbreak.”

More information from the WHO about the current Zika outbreaks can be found here.

The Bernhard Nocht Institut for Tropical Medicine told news agency DPA on Wednesday that there have been ten cases of the virus in Germany since 2013. All those infected had contracted the virus while travelling abroad.

The first registered case of the virus in Europe was a man in Germany in 2013 who had travelled to Thailand, according to DPA.