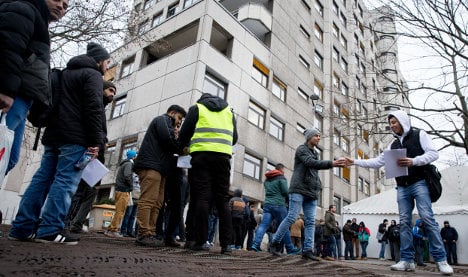 Refugees at the LaGeSo centre in Berlin. Photo: DPA.

A Berlin police spokesperson said on Wednesday evening that the volunteer who first reported the death of a 24-year-old Syrian refugee had “admitted that he had made it all up”.

Police questioned the volunteer after he reported on Facebook the story of a refugee who supposedly stood for days in front of the Berlin Health and Social Affairs Office (LaGeSo) – where all Berlin refugees have to be registered – and died of exposure to the cold.

News of the death spread quickly online on Wednesday and well-wishers started bringing tributes to the centre for the alleged victim.

By the late morning many national newspapers had picked up the story and it was making headlines across the country.

It appeared to prove the dysfunctionality of Lageso, where the head had already been pushed into retirement in December due to the notoriously slow functioning of the office.

But after an investigation involving police, firefighters, hospitals and other officials, police announced Wednesday evening that there was “no dead refugee”.

Berlin Interior Senator Frank Henkel said on Thursday that he wanted consequences for the volunteer.

“This is one of the most rotten and insidious actions that I have ever seen,” Henkel said. “Berlin's authorities had to search for hours and with great efforts for a fictional 'Lageso death'.”