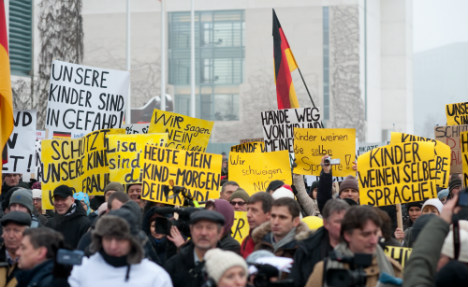 Berlin police last week rejected the 13-year-old's account that she was sexually assaulted by “foreigners”, but Russian Foreign Minister Sergei Lavrov on Tuesday lent credence to the girl's allegations and charged that her disappearance had been “hidden”.

Government spokesman Steffen Seibert on Wednesday hit back, saying “there is no reason, in fact it is unacceptable, for this incident to be politically exploited.”

The teenager, identified by Russian media as “Lisa”, went missing on January 11, reportedly on her way to school.

She subsequently returned and filed a police report, with her parents telling investigators she was kidnapped by three “foreign” men at a railway station in eastern Berlin and taken to a flat where they raped and beat her.

The case sparked outrage and allegations on far-right websites and Russian media outlets of an official cover-up.

But Berlin's prosecutors said there was no evidence that the girl was forced to have sexual relations during that period.

Martin Steltner, a spokesman for Berlin's prosecutor's office, said that it had opened an investigation against a man on possible statutory rape charges.

Sex with anyone under the age of 14, even if consensual, is a crime in Germany which is punishable by imprisonment.

Amid ongoing tensions between Russia and the West on a range of issues, Lavrov used the occasion of his annual press conference to draw attention to the case and said Moscow was directly involved.

“It is clear that the girl — absolutely for sure not voluntarily – disappeared for 30 hours.”

Lavrov said he regretted the news of Lisa's disappearance had “been hidden for a very long time, for some reason.”

“What I can fundamentally say is that in Germany we have a state based on the rule of law,” he said.

“We have an independent judiciary that every citizen can trust and this justiciary must be able to pursue its investigation without outside influence.”