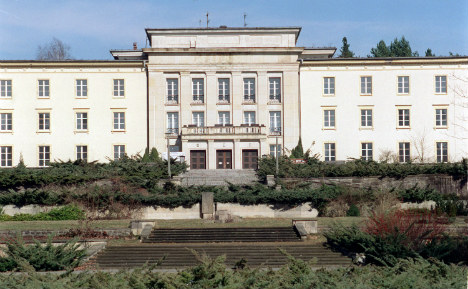 One of the disused buildings at Wandlitz. Photo: DPA

Berlin has been trying to sell the – in theory – prime slab of real estate north of the German capital for 15 years.

But rather than a gem that the cash-strapped city, which is scrambling to pay for a record refugee influx, can liquidate, Berlin has admitted it sees the asset as little more than a millstone around its neck.

Berlin Immobilienmanagement GmbH (BIM), the city's wholly owned real estate agency, has in effect given up on the sale and expressed concerns it could fall into “the wrong hands”.

“I am really afraid that this could become a shrine for Nazis and I don't think we should take that risk,” the executive director of the BIM, Birgit Moehring, said.

Instead, it hopes to lease the property, whose idyllic setting is nestled in a wood and perched on the small Bogen lake.

The squat, sprawling house was used by the top Nazi as “country retreat” perfect for trysts with a revolving cast of budding actresses and paramours.

“It was refuge from the busy city” 40 kilometres (25 miles) to the south, BIM spokesman Christian Breitkreutz told AFP.

Berlin itself bought the land complete with a small cabin in 1936 for Goebbels, Hitler's nefariously skilled spin doctor, in honour of his 39th birthday.

Goebbels was taken with its secluded setting and subsequently had a much larger villa built on the site bankrolled by UFA, the movie production house he ran with an iron fist. Today, the original generous picture windows, rich wood panelling and marble fixtures can still be seen, said Roberto Mueller, who has worked as a guard at the site since 1984.

But the house, ravaged by moisture and biting cold in the isolated and abandoned site, has begun to rapidly crumble.

The city had repeatedly tried to sell the house in recent years and a last attempt, via a public tender, came up dry in December, Moehring said, confirming that BIM had finally given up.

Goebbels and his wife Magda committed suicide in Hitler's bunker as Berlin was overrun by Soviet Army troops in May 1945, after she murdered their six children.

Dealing with the Goebbels villa has been all the more complicated because it is on the same slice of land as another vestige of the country's tumultuous past.

In the post-war years, East Germany built a vast complex on the land in the Stalinist style of the early 1950s to house a training centre for the FDJ, the communist party's youth indoctrination organisation.

The regime also used it to put up visiting party cadres from “brother states” such as Vietnam, Cuba and Angola.

At the time, the neighbouring Goebbels villa was converted into a supermarket for FDJ students and a children's nursery, Müller said.

Day by day, they are falling apart.

“At present there is no heating, no running water, there is serious damage to the facades, the roofs are falling apart and inside there is a lot to do too,” Moehring admits, saying renovation costs would be “considerable”.

Currently the only viable use for the phantom village has been as a unique, evocative film set, most recently for the adaptation of the international wartime bestseller “Alone in Berlin” starring Emma Thompson and Brendan Gleeson.

“What would really appeal to us would be if someone arrived with an intelligent concept to use this place which is so steeped in history,”

Moehring said, suggesting a continuing education campus or a hotel as other possible options.

She said BIM had been in touch with potential investors. But a major stumbling block remains the fact that the Goebbels villa is a listed building.

Because that prevents any major change to the structure, Moehring would like to see it stripped of its protected status.

“I am someone who absolutely defends the importance in this city of always being able to feel the presence of history,” she said.

“But you also have to ask the question whether it is sensible to maintain certain buildings under the protection a historic monument grants.”

If it were lifted, Moehring said the best thing might be the most radical measure: razing it to the ground.

Germany has often been confronted with questions over how to deal with the toxic legacy of sites linked to its bitter 20th century history.

Hitler's own “Eagle's Nest” mountain-top lodge now has a restaurant, a cafe and shops selling books with titles such as “Hitler's Mountain” that draws thousands of tourists each year.

Many of Germany's ministries pitched up in the Nazis' former official buildings when the government moved to Berlin from Bonn in 1999.

And the hangars of the former airport Tempelhof, a prime example of the Nazis' architectural gigantism, and the erstwhile headquarters of communist East Germany's feared Stasi secret police are both being used to house tens of thousands of asylum seekers.