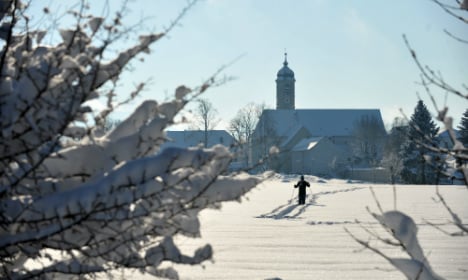 “The rural regions are a laboratory of integration,” said Karl-Friedrich Thoene from the infrastructure and agriculture ministry of the eastern state of Thuringia.

Unlike in densely populated big cities, “there can be no parallel societies in rural areas,” he said. “The village community is the ideal chance for integration.”

The lower cost of living, cheaper rents and tight-knit communities in the countryside are main “factors of success” for integrating the newcomers, said Gudrun Kirchhoff, an expert on refugee issues at the German Institute of Urban Affairs.

Social life in small communities is typically held together by clubs and associations in which most villagers take part, experts point out.

Germany has taken in more than 1.5 million asylum seekers since 2014, from war-torn Syria to Balkan countries. On arrival, they are allocated accommodation across the country, with cities, towns and villages all expected to take their share.

Wolfgang Borst, mayor of the Bavarian village of Hofheim, population 5,000, is among those who see the influx as an opportunity.

“We are very satisfied. We are gaining a lot more villagers,” said Borst, who has long been concerned about Hofheim's dwindling population.

Of four young Syrians living in Hofheim who have just obtained refugee status, “one will leave, the other three will stay,” he said.

Borst was speaking at the Grüne Woche (Green Week) agricultural fair in Berlin, which ran until January 24 and where the refugee issue was the subject of many round-table and panel discussions.

Some regard the mass arrivals as a huge challenge, but others see it as a chance.

And for the refugees themselves, frequently traumatized by the war and destruction they escaped, the peace and quiet of the open countryside can be a godsend.

Hofheim and six nearby communities have taken in a total of 224 migrants and housed them in 19 homes. Their joint “asylum support group” organizes German language courses, traffic safety classes and sporting activities.

That is not to say that life in remote and isolated communities is free of problems.

Dwellings are frequently far apart, public transport networks are threadbare and people often have to travel long distances to see a doctor or attend a language class.

There are also entrenched social structures, very clear ideas about societal norms and often a “latent racism” and distrust of outsiders, said Kirchhoff.

More prosaically, Internet connections are often slow and few supermarkets stock the staple foodstuffs that the refugees are used to.

Gransee, with a population of 4,000 and located 65 kilometres (40 miles) north of Berlin, has opened up a home with space for 80 refugees.

“Our aim was to prepare for their arrival and dismantle prejudice.”

When the first Serb family arrived in 2014, he and the mayor used Google Translate software to write a short welcome speech, much to the newcomers' bemusement, Pölitz remembered with a chuckle.

While refugees are obliged to stay in their assigned accommodation during the asylum application process, they are free to move once they are given refugee status.

And many choose to move to the cities, where more of their compatriots live or the employment prospects are better.

Thoene argued that “we need incentives to persuade the migrants to stay” in rural areas.

Gerlinde Augustin, who heads the SDL institute for rural and land development in Augsburg, said care should be taken not to pit the interests of newcomers against those of native inhabitants.

A local family who has waited for months for a kindergarten place, for example, may have little understanding if refugees are awarded a place straight away, she said.

Timm Fuchs, of the German federation of towns and municipalities, argued that not every village should have to take in refugees, only those that are economically strong enough to cope.