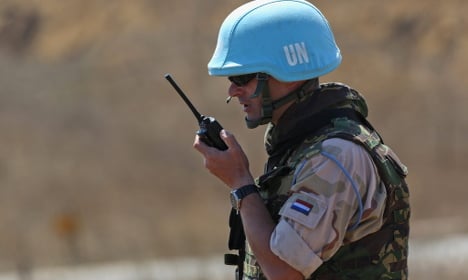 The UN peacekeeper was kidnapped on February 17th, 2013. Photo: DPA

The 24-year-old man named as Suliman A.-S. is believed to be a member of a branch of the Al-Nusra Front jihadist group, the prosecutor said.

Investigations found that he had participated in the kidnapping on February 17th, 2013 and was “involved in guarding the kidnapped victim between March and June 2013”.

He is “suspected of an attack during Syria's civil war against a person, who was involved in a peacekeeping mission under the United Nations Charter, and was therefore entitled to protection,” said the prosecutor.

“The arrest warrant against him is on suspicion of a war crime against a humanitarian operation,” the prosecutor added.

The peacekeeper with the UN Disengagement Observer Force (UNDOF) in the Golan Heights managed to free himself in October 2013. It was unclear why he had been in Damascus.

The peacekeeper's identity was not revealed by German prosecutors, but the UN had said in 2013 that Carl Campeau, a Canadian legal advisor, was abducted on February 17 as he drove through a Damascus suburb.

He was freed in October, without a ransom being paid.

Two groups of UNDOF peacekeepers were also abducted in the same year in the Golan Heights ceasefire zone, the first comprising of 21 soldiers, and the second four. All were Filipinos and subsequently freed.

UNDOF, which has been in the Golan Heights since 1974, had about 1,000 troops and civilian staff in 2013. The 917 troops from Austria, India, the Philippines, Morocco and Moldova carried only very light arms.

In the wake of the spate of kidnappings, Austria withdrew its force over security reasons.