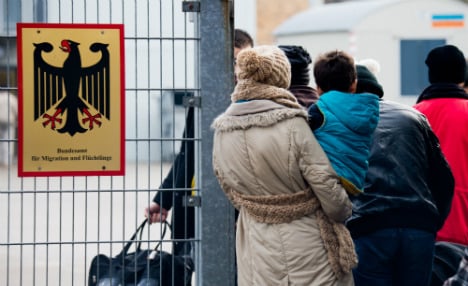 People wait outside a regional branch of the Federal Office for Migration and Refugees in Braunschweig, Lower Saxony, in December 2015. Photo: DPA

Many of the plaintiffs suing the Federal Office for Migration and Refugees (BAMF) in courts in the western state have been waiting more than a year for a decision on their case, the Rheinische Post (RP) reported.

Journalists at the RP contacted all seven administrative courts in North Rhine-Westphalia (NRW) and found that many of the cases alleged “inactivity” by the authority.

The BAMF has been struggling with a backlog of hundreds of thousands of cases since before the massive increase in refugee arrivals in the second half of 2015 – with its poor performance forcing its boss to step down last September.

Failings at the BAMF have produced unexpected understanding for the asylum seekers' legal cases among the authorities, with NRW justice minister Thomas Kutschaty telling the RP that “uncertainty about when an asylum application will finally be decided drives many people to despair.”

“It can't be the case that asylum seekers are forced to take legal action against the state after crossing the border, so that it finally makes a decision about their application,” the Social Democratic Party (SPD) politician said.

Politicians have been arguing for months about how to speed up the asylum process.

Many suggest faster formalities both for those coming from war-torn countries like Syria, who are very likely to be granted asylum, and those from places declared “safe countries of origin” by the German government, such as the western Balkans, who are almost certain not to be accepted.

Almost all of the legal cases identified by the RP had been launched by people whose national origin means they have a very good chance of being granted asylum.

Court insiders told the newspaper that simply opening a court case can be enough to push the BAMF to deal with their case more quickly, as the authority is keen to avoid embarrassing legal defeats in public.