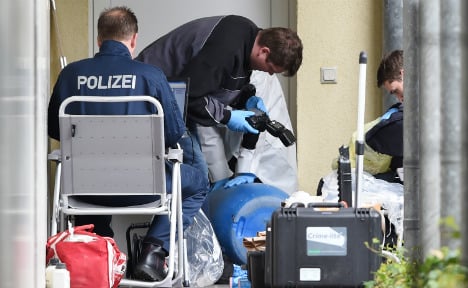 In recent months Germans have become used to public events being cancelled.

There was the international football match against the Netherlands in November – just days after the Paris attacks.Then the street parties in Munich at New Year.

But, before all these, a bike race – scheduled to be held in Frankfurt on May 1st 2015 – was cancelled due to fears of an imminent terror threat.

And whereas reasons for police cancelling the Hannover and Munich events are still shrouded in mystery, a trial beginning in Frankfurt on Thursday will show exactly why authorities decided to shut down the sporting event.

Explosive ingredients and a bomb

On trial is one man, Halil D., a German citizen with Turkish roots, who prosecutors allege acted alone to build a pipe bomb with which he hoped to kill participants in the “Round the Finanzplatz” (Rund um den Finanzplatz) race, the Süddeutsche Zeitung reports.

Halil D. was initially arrested with his wife and the pair came to be known in sections of the German press as “the terror couple from Oberursel [a suburb of Frankfurt.]

Suspicions were first aroused when the pair bought a hydrogen peroxide solution in a local building supplier and Halil D. gave a false identity to the cashier.

Hydrogen peroxide was a component of the bombs used by terrorists to kill 52 people in London on July 7th 2005.

When police began to watch the 35-year-old, they noticed that he kept returning to points along the route of the upcoming cycle race, sometimes taking his family, sometimes simply going alone.

Upon searching Halil D.’s home, police found a homemade pipe bomb in the cellar, along with various other pieces of weaponry.

“We assume we managed to prevent an attack,” a police spokesperson said after taking him into custody.

The unemployed former chemistry student had let his beard grow long and had connections in the Salafist (a branch of Islamic fundamentalism) scene, the SZ reports.

Furthermore his own sister said that he had allowed himself to be brainwashed by Islamist radicals in recent years.

But Halil D.’s lawyer says that case against his client is thin and has asked if there would even be a trial if he didn’t have a Muslim-sounding name and a beard.

Halil’s wife Senay D. was released weeks after the arrests, having persuaded investigators that she knew nothing of the bomb in her cellar.

Both suspects also gave “plausible” accounts of why they had bought the hydrogen peroxide solution, claiming it was needed to get rid of mould in the apartment.

When investigators inspected the house they corroborated the fact that some of the solution had been used to tackle mould.

But of the 2.9 litres he had bought, this only accounted for 100 milliliters. The majority of the solution had still not been touched.

There is also no concrete proof that Halil D. wanted to attack the bike race. Nor does he have established connections to a terror network.

The bomb itself has been described by experts as technically unsophisticated but dangerous within a proximity of eight to ten metres. Whether it is capable of killing people is also not clear.

An old school friend of Halil D.’s has told investigators that the two of them used to build explosives of this sort in their school days to blow up cigarette machines.

As for the other weapons found by police in the cellar, none of them is functional, experts have assessed.

Although Halil D. was more than willing to talk to police about the hydrogen peroxide solution and why he gave a false identity – he didn’t want trouble – he has stayed silent on the bomb.

As for the bike race, he has claimed he has “no idea where the accusations come from and what bike race they are talking about.”