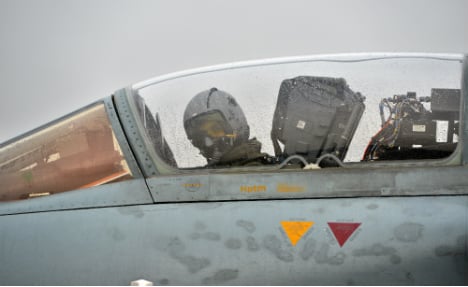 A Tornado pilot in the cockpit. Photo: DPA

The six aircraft sent to Syria are fitted with surveillance technology, and had been touted as being capable of taking high-resolution photos and infrared images, even at night and in bad weather.

But Bild reported that night flights were impossible as pilots are blinded by the cockpit light which is far too bright.

A defence ministry spokesman admitted that there is “a small technical problem that has to do with the cockpit lighting”.

“It is possible that the night goggles worn by pilots result in reflections,” he said, adding that the ministry was looking at resolving the problem within the next two weeks.

He added that there was “currently no need to fly at night in Syria” and that the deployment was performing at “100 percent”.

Germany's military has faced criticism in recent months over the state of its weaponry.

Its G36 assault rifle — which is being phased out by the army — became the butt of jokes after reports that it had trouble firing straight at high temperatures.

Der Spiegel magazine had also reported last year that only four of the military's 39 NH90 helicopters were currently useable.

Most recently, the army said the external fuel tank of one of its Eurofighter combat planes fell off as it was preparing for takeoff.