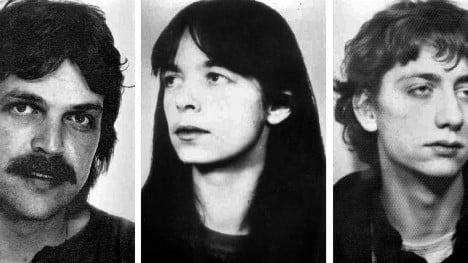 In both robberies, the most recent of which happened at the end of December, Daniela Klette (57), Volker Staub (58) and Burkhard Garweg are alleged to have held up security vans, but failed to make away with any cash.

The three were some of the last members of the notorious Red Army Faction, a terrorist cell founded in 1970, which was blamed for over thirty murders, numerous bombings and part-responsibility for the hijacking of a plane in its almost three decade existence.

The group announced its dissolution in 1998, but two years later state prosecutors announced they were investigating Klette and Staub on suspicion of founding a new terror cell.

Their DNA was found at the scene of a robbery in Duisburg in 1999, as well as on a money transporter that was successfully robbed, with the thieves making off with over a million Deutsche marks. Prosecutors believed at the time that the money was being used to train new recruits.

But the trio went silent until last year.

The first robbery took place on June 6th 2015 in a supermarket parking place on the outskirts of Bremen, public broadcaster ARD reports.

After blocking the path of a security van with the first car, two camouflaged and masked people got out of the vehicle carrying Kalashnikov rifles and proceeded to threaten the personnel in the car.

A third assailant then also appeared on the scene carrying a rocket launcher.

At least three shots were fired, which hit the money transporter’s wheels and metal work.

But as they still couldn’t open the doors of the vehicle and access the valuables inside, the trio fled in a car which the third one had arrived in.

Details of the second attempted robbery are still to be released, but it was also on a security van, this time in Wolfsburg.

Police and RAF experts alike do not believe that the latest robberies were aimed at financing terrorist operations.

“I don't think a fourth generation is about to come along,” terror expert Butz Peters told ARD, explaining it was more likely they were trying to secure money to live out their twilight years.
“People who have lived in the underground for years haven't had the chance to pay into a pension fund or to build something similar up,” he said.