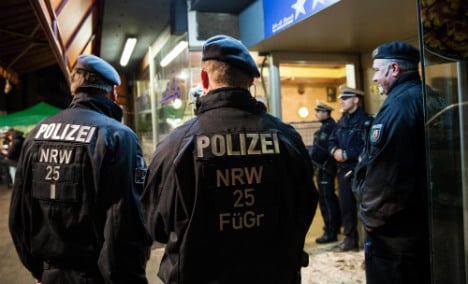 Police during raids in Düsseldorf on Saturday. Photo: DPA
A 26-year-old man from Algeria was arrested over the weekend for sexual assault and for stealing a cell phone, according to Cologne prosecutor Ulrich Bremer.

He was arrested along with a another Algerian man at a refugee home, who was detained for stealing a cell phone.

Police said in a report that the men had both been searched and two phones had been discovered – one of which had been taken during a reported group sexual assault. The second phone had been reported as a pick-pocketing.

Cologne police also reported on Monday that another man had been arrested in Aachen for stealing a cell phone on New Year's Eve in Cologne. The third man was a 25-year-old Algerian asylum seeker.

Reports of the mass sexual assaults and thefts on New Year's Eve have stirred up heated debate across the country about refugees as many of the victims reported the attackers to be Arabic or North African.

Police are investigating 21 suspects of various crimes reported that night, eight of whom have been taken into custody.

German media previously reported that two men were arrested in connection with the sexual assaults, but they were released due to lack of evidence and police never confirmed the connection.

Police raid in Maghreb district in nearby Düsseldorf

At around 5.30pm police raided the narrow streets behind the main train station in the capital of North Rhine-Westphalia, storming 18 betting shops and coffee houses in the area, police report.

Officers then checked 290 people, taking 40 of them into custody.

During the raid men of north African heritage were detained, searched, and given background checks on their refugee status.

All but two of the detained men were later released.

One was detained because his deportation from the country had already been ordered. Another was already being looked for in connection with trading in stolen goods.

Six stolen mobile phones were found in the course of the raids but police could not identify whose possession they were in.

Young north Africans have become the focus of national attention since victims of mass sexual assaults and thefts in Cologne reported that their assailants looked like they came from the region.

According to the Rheinische Post (RP), the police’s attention became focused on Düsseldorf after groups of north Africans made the short train journey from Cologne to the state capital in the hours after the attacks.

Mobile phones stolen in Cologne at New Year have also allegedly been sold on in the Maghreb district.

But police say that the raids had been planned before the Cologne attacks and were part of a separate ongoing investigation into criminality in Düsseldorf.

A police report seen by Spiegel claims that north Africans commit a crime every 3.5 hours in Düsseldorf, with most being theft in the city centre.

For the first time in a long time no cases of theft were reported in Düsseldorf city centre on Saturday night, the RP reports.

Police investigations into the refugee status of the detained men continue.