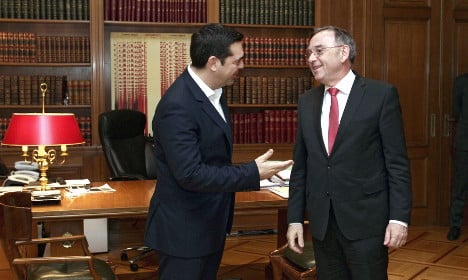 The agreement signed at a ceremony in Athens attended by Norbert Walter-Borjans, finance minister of the German state of North Rhine-Westphalia, commits the two countries to share information on insolvent companies and tax management systems.

Walter-Borjans, who has handed Athens the names of more than 10,000 Greeks suspected of hiding 4 billion francs (€3.7 bn) from tax authorities, said the declaration sent “a message of closer cooperation between Greek and German authorities to combat tax evasion more effectively.”

Greek deputy justice minister Dimitris Papaguelopoulos said he hoped what he called the “Borjans list” would mark the start of “a long cooperation with North Rhine-Westphalia, which is to the fore in the fight against tax evasion.”

The German minister later held talks with Prime Minister Alexis Tsipras, who has vowed to crack down on tax dodgers — one of several requirements of Greece's latest international bailout.

In December, German prosecutors uncovered details of at least 200 suspected tax dodgers at an Athens branch of Swiss bank UBS. Their Swiss accounts had deposits ranging between €1.5 million and €12 million, according to judicial estimates.