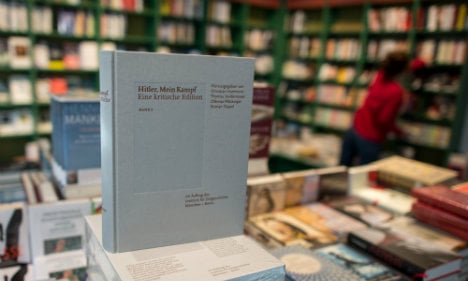 “It's available like any other book, but because of the special circumstances there is a certain waiting time,” a spokeswoman for the Institute of Contemporary History (IfZ) in Munich said.

The IfZ published its annotated version of Hitler's infamous text at the start of this year, saying that it wanted to make sure a critical version was available as soon as the copyright expired.

Until now, the work had been owned by the Bavarian state government, which prevented any new editions being published in Germany for the standard term of 70 years after the death of the author.

But demand was already high in advance of the IfZ version going on sale on January 8th.

Director Andreas Wirsching said that his colleagues had received 15,000 pre-orders for the Hitler book – far exceeding the 4,000 copies in the first print run.

Many booksellers offer customers the chance to pre-order the book, but some individuals sought to profit from its current scarcity.

Copies were being offered for sale on Amazon for up to €600 – ten times the cover price of €59 – while on eBay the book was priced at up to €685 by Thursday morning.

Amazon said that it will remove over-priced copies of the book from its online store and that all profits from sales of Mein Kampf will go to organizations that support victims of the Nazis.