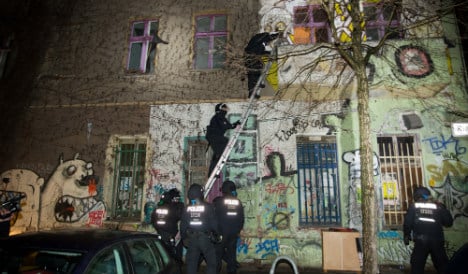 Rigaer Straße 94 is one of the few buildings in Berlin to remain largely under the control of squatters from the far-left scene.

But its halls and stairways were filled with uniforms on Wednesday night as police conducted a search that they said was aimed at finding dangerous items.

Police said that on Wednesday afternoon, a policeman had been writing a parking ticket outside when he was confronted by a masked man.

When he asked to see the man's ID, the officer was attacked by two other men and a woman, who knocked him to the ground and beat him.

The officer reported that the four attackers then retreated into the house.

“We don't tolerate any places where violent offenders can hole up,” a police spokesman said.

“We want to make it clear that you can't attack a policeman.”

The raid was led by officers from city SEK (SWAT) teams, some of whom entered via the roof as parts of the building were barricaded.

Tagesspiegel reported that 200 police were in and around the building, while 300 were securing the area.

But by the time of the search the four people were nowhere to be found.

As they didn't have a warrant, police were not permitted to enter any of the apartments in the building and only searched its corridors, stairwells, courtyard and roof.

Police tweeted later that they had found a large number of dangerous objects in the building.

But critics said that the police raid was a massive over-reaction.

“For four years [interior policy senator] Olaf Henkel has done nothing [about Rigaer Straße], and now for once he has had to show off the power of the state,” said Green party politician Canan Bayram.

“Imagine that something like this happened in Kollwitzplatz [in wealthy Prenzlauer Berg] and hours later the police do a 'house search',” independent city parliament member Christopher Lauer tweeted.

But police union GdP backed the move, saying that “the attempt by the far-left scene to create a lawless zone in the capital city must be resisted decisively.”