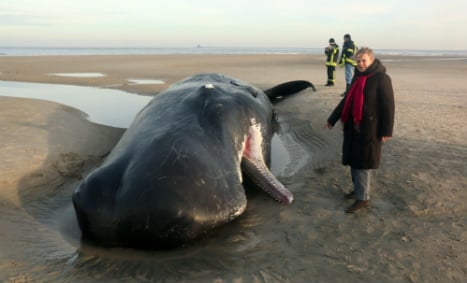 The whales lie in a deep channel of water carved out of the sand by their own immense weight. Their thick skin is beginning to cringe and gas is starting to build up in their bellies.

On Friday the two giant mammals washed up on the shores of Wangerooge, an island off Germany’s North Sea coast.

The question puzzling local authorities is what should now be done with the bodies.

“We need to see if we can get close enough in to drag them away by boat, or whether they’ll have to be dismembered on site,” said the island's mayor Dirk Lindner.

Tests have also been conducted on the leviathans which could clear up why they died in this unusual spot.

Lindner believes the huge animals were already dead when they were washed up on the shore.

“They probably swam the wrong way,” he said. Manfred Knake a whale expert from Lower Saxony explains that whales find it difficult to navigate in the North Sea because it is too shallow.

“It’s only 100 metres deep at most, so the whale’s sonar stops working. They don’t get a proper ping anymore and they get completely confused,” he says.

Sperm whales are normally found in the world’s deepest oceans where they can swim hundreds of meters down into the depths.

Kanke says that sperm whales washing up in the north sea is a phenomenon that “has been seen over and over again through the centuries”, downplaying fears the animals had been sent off course by wind turbines which have been installed in the area.

Sometimes whole herds of whales get lost in the shallow waters dividing the United Kingdom from mainland Europe, after they make a turn too soon after passing by the Shetland Islands, the expert says.

But such incidents remain thankfully rare and two whales washing up on the German coast simultaneously appears to be a first for the record books.

The last time a whale washed up on the shores of Wangerooge was in the 1950s, when an Orca got stranded on one of the island’s sandy beaches.

In the 1990s two sperm whales washed up on the German coast in separate incidents, one of which can now be found in the maritime museum in Wilhelmshaven.