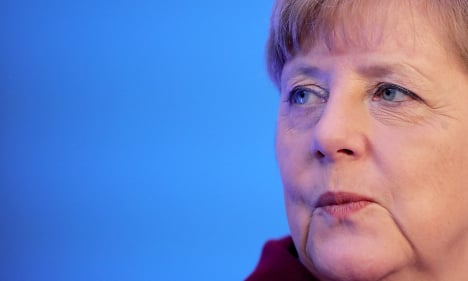 "If the law does not suffice, then the law must be changed," Angela Merkel said on Saturday. Photo: DPA

Turning away from her mantra of “we will manage this” over the record influx of asylum seekers that reached 1.1 million last year, Merkel has now backed changes to the law to make it easier to expel those convicted of crime.

“If the law does not suffice, then the law must be changed,” she said on Saturday, warning that any refugee handed a jail term — even if it was a suspended sentence — should be kicked out of the country.

Even though no arrests have been made or formal charges laid, Cologne police said those suspected over the rampage near the city's railway station a week ago were mostly asylum seekers and illegal migrants from North Africa.

Some 516 cases have already been lodged, police said, adding that about 40 percent of these related to allegations of sexual assault.


Separately in Hamburg, police said 133 cases have been lodged for similar violence on New Year's festivities.

Justice Minister Heiko Maas said he believed the violence in Cologne was organised.

“For such a horde of people to meet and commit such crimes, it has to have been planned somehow,” he told Bild am Sonntag newspaper.

“No one can tell me that this was not coordinated or planned. The suspicion is that a specific date and an expected crowd was picked,” he said.

The scale of the Cologne assaults has stoked public anger and fear, with a poll published by Bild am Sonntag newspaper saying that 39 percent of those surveyed felt police did not provide sufficient protection, while 57 percent
did.

And just under half (49 percent) believed the same sort of mob violence could hit their hometown, reported the newspaper which headlined its article with the question: “Is the New Year Eve scandal the result of wrong policies?”

With thousands of asylum seekers streaming into Germany every day since last year, Merkel has already come under intense pressure, even within her own conservative alliance, to reverse her open-door policy to war refugees.

Critics have questioned Germany's ability to integrate the massive numbers of newcomers, many of whom hail from Syria, Iraq and Afghanistan.

Merkel had until now not wavered from her stance, even using her New Year's address to tell Germans that the record influx is “an opportunity for tomorrow”.

Although she has vowed steps to reduce refugee numbers next year, she has not set an upper limit on the number of asylum seekers Germany could take in.

Her plan involves persuading other EU members to take in more refugees, and an EU deal with gateway country Turkey to better protect its borders.

But after Cologne, she has adopted a harsher tone, saying also that “we must speak again about the cultural fundamentals of our co-existence”.

“It's not premature to speak of a turning point, or at least the reinforcing of a trend that had already started to take shape lately,” Andreas Roedder, contemporary history professor at Mainz University told AFP.

Bit by bit, the government has begun to tighten up checks, including reinstating individual interviews in asylum applications for Syrians since January 1, which had earlier been waived.

An advertising campaign is also going on in Afghanistan to dissuade middle-class Afghans from coming, telling them that they should stay and help rebuild their home country.

Balkan states have been designated safe countries of origin — a category which meant that citizens would not usually be granted asylum — and Algeria and Morocco could soon join that list.

“After a period of open-arms policy, the time has perhaps come to change the tone. Right now the question is on expulsions, toughening the law, as what happened in Cologne really has a political dimension to it,” said Tilman
Mayer, a political analyst at the Bonn University, speaking to Phoenix television station.

Merkel is caught in a bind as asylum seekers are still arriving at the rate of between 3,000 and 4,000 a day, despite the harsh winter conditions.

Several former eastern bloc countries have so far shown no signs of heeding to her call to take in more refugees, with Czech President Milos Zeman in December calling the current refugee influx to Europe “an organised invasion”.

Slovak Prime Minister Robert Fico also seized on the Cologne violence to hammer home his point against the influx of asylum seekers, accusing politicians of continuing “to trivialise — even after the attacks in Cologne and other European cities — the security risks associated with unregulated and uncontrolled migration within the EU”.

“The situation could degenerate very quickly for Merkel within the CDU because resistance and nervousness is growing,” said Roedder.

Opinion polls are predicting that populist right-wing party Alternative for Germany would win their first seats in three regional parliaments during key elections in March.