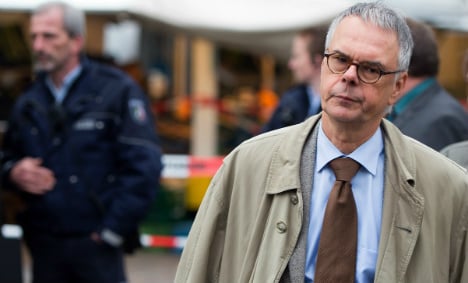 Wolfgang Albers was suspended after losing the confidence of the Cologne city mayor. Photo: DPA

Media reports on Thursday and Friday “mean I have to conclude that the police has had a significantly different picture of the New Year's Eve situation than the one supplied at my request by the police leadership,” Reker said in a statement.

It was the last straw on a day that saw Albers suspended, as German media reported late on Friday afternoon.

Reker said that the police had concealed “politically sensitive” information from her and from the public and that trust in the force had been “seriously shaken”.

“I can't accept that I, as mayor of this city, first got this information from today's media, especially about the origins of the people involved who are under investigation,” she said.

With all of Germany watching the western cathedral city and more than 170 crimes, most of them sexual assaults, reported on New Year's Eve, Albers had been on the chopping block for days. Albers had said on Tuesday that his men had few leads on the culprits behind the wave of crimes around the train station and cathedral.

But it emerged on Thursday evening that police had checked identities and taken numerous perpetrators into custody on New Year's Eve – with many of them having papers proving their status as refugees.

On Friday afternoon, North Rhine-Westphalia interior minister Ralf Jäger said that Albers had to be removed “because public trust in the police must be restored, and the Cologne police must regain its ability to act.”

In a Facebook post on the Cologne Police page, Albers said that “it's also part of my job to take responsibility in difficult times. The Cologne police were unable to fulfil the expectations placed on them by citizens.

“The public debate surrounding me as a personality is making the important work [of investigating the New Year's Eve events] more difficult and causing delays. That's why I understand Ralf Jäger's decision today.”

Under fire from all sides

Reker had to distance herself from her city's police leaders, especially Albers, who was under massive criticism from unions, the media and politicians.

Tabloid Bild said that it was “no longer a question of 'if' but only of 'when' Albers will be forced to step down” in its Friday edition.

Leaks from inside the police hierarchy on Friday showed a battle between the commander on the ground and higher-ranking officers over how much information to include in a six-page internal police report compiled on January 2nd.

Earlier on Friday afternoon, Albers made a bid to defend himself, saying that “I have always made clear that many of the people affected by these measures [by officers on New Year's Eve] had documents from the refugee authority.”

“Accusing me of covering-up the ethnic origins of the suspects is totally absurd.”

Earlier in the day, police officers' union GdP took aim at the city police's failure to be open about the events of New Year's Eve.

“This reticence is the reason that colleagues are now leaking reports about the deployment,” GdP chairman for North Rhine-Westphalia Arnold Plickert said.

The lack of information has handed politicians in the city, state and federal governments ammunition to criticize officers on the ground rather than the leadership, Plickert added.

“Officers are really angry because now they've been backed into a corner,” he said. “They did everything possible on the ground and now many of them feel almost like they're the criminals.”