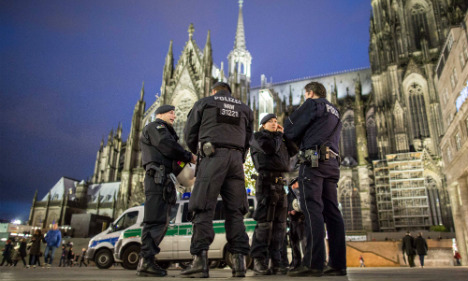 For any woman, the sight must have been terrifying. On New Year’s Eve in the German city of Cologne, groups of drunk and aggressive men surrounded them in the town centre, groping and mugging them. The estimates are that there were between 500 to 1,000 attackers (UPDATE: the police clarified that the crowd was 1,000 strong, not that there were 1,000 attackers), and the early indications are that their efforts were co-ordinated.

A minister described these events as a “completely new dimension of crime”. According to Wolfgang Albers, the police chief, “sexual crimes took place on a huge scale.” He continued: “The crimes were committed by a group of people who from appearance were largely from the north African or Arab world.”

The volume of sexual violence against women worldwide is extraordinary: it is horrifying, heartbreaking, and finally it is enraging. Whether women are in public or in the supposed safety of their own homes, the offences committed against them are off the scale.

To quote the United Nations, “It is estimated that 35 percent of women worldwide have experienced either physical and/or sexual intimate partner violence or sexual violence by a non-partner at some point in their lives. However, some national studies show that up to 70 percent of women have experienced physical and/or sexual violence from an intimate partner in their lifetime“ (my italics).

The Cologne assaults, then, did not occur in isolation, but as a particularly severe eruption of a situation which, in global terms, has always been volcanic. If that sounds dramatic, then so be it: after all, the statistics and the eye-witness accounts are stark enough.

One of the victims, identified only as Katja L, told the Kölner Express: “When we came out of the station, we were very surprised by the group we met, which was made up only of foreign men…We walked through the group of men, there was a tunnel through them, we walked through…I was groped everywhere. It was a nightmare. Although we shouted and hit them, they men didn’t stop. I was horrified and I think I was touched around 100 times over the 200 metres” (translation by The Guardian).

One investigator told the Express: “The female victims were so badly pushed about, they had heavy bruises on their breasts and behinds.”

Discussion of the attacks has dominated social media in Germany, with accusations of a media cover-up flying from some quarters, while others have expressed fear that the events would boost anti-refugee sentiment. People in Düsseldorf even set up a “self-defence force” group on Facebook.

In the ensuing conversation, there is a very real danger that the women assaulted will disappear from view, quickly buried beneath a tug-of-words between the Right and the Left. In fact, it has already begun happening. So let us reiterate the facts. Scores of women were set upon by numerous men in a public place. Ninety of them made complaints to police. There were also sexual assaults of a similar fashion in Hamburg on the same night. The level of entitlement that these men felt towards the bodies of their victims is appalling.

Police watch over an anti-racism demonstration outside Cologne's main train station in the wake of the sexual assaults. Photo: DPA

These events are proving particularly controversial because the Chancellor, Angela Merkel, has within the last 12 months admitted 1.1 million refugees from Africa and the Arab world – the same demographic dominant among the young men who carried out these assaults. Merkel’s policy is therefore being blamed by many for the influx of sex attackers.

On a point of accuracy, it must be noted that many of these attackers were already known to the police, and were not drawn from the recently-arrived refugees. (UPDATE: A leaked report from the Cologne police seen by Die Welt Am Sonntag stated that the majority of the attackers comprised freshly-arrived refugees).

This conversation will inevitably be dominated by the issue of race, so we may as well go there. In racial terms, Germany is not particularly diverse, and the majority of the black and Arab people you see tend to be working-class. There are all sorts of economic reasons for that, one being that those arriving from Africa and the Middle East find it very difficult to get papers or work once they are here.

Berlin's Görlitzer Park has long been known as a hotspot for the drug trade. Photo: DPA

At the risk of sounding uncharitable, I don’t think that as many people as I would like are concerned with the socio-economic nuances of why these black men are so poor. I think that there is instead a tendency, more widespread that many people might like to acknowledge, to regard black men as inherently untrustworthy or criminal.

I say this partly because of my own experiences in the city, and from speaking to several other friends who are non-white. A friend from West Africa, when visiting the city, found it so difficult to secure an AirB&B apartment that he had to ask someone to do it on his behalf. The stories of black people struggling to find rooms and flats in the city are legion – not that it is easy to rent in Berlin anyway, given the popularity of this place, but the tales of discrimination do all start to stack up after a while.

More mundanely, I am struck by how often – even on the most crowded of trains – white Berliners will leave a space next to me, somehow fearing the prospect of sitting next to a male of African appearance. And if that sounds paranoid, then it was only something I first noticed when a sympathetic white man, shaking his head with bemused laughter, pointed it out to me.

For those who might think that I am being overly sensitive, I will say that I am merely stating facts. I love this city, and life here is well worth dealing with these inconveniences. But these instances have made me realise that the cultural expectations of black men in some parts of Germany are already dangerously low. And now we have these attacks in Cologne, one of the worst incidents of its nature that I can recall. Travelling on Berlin public transit can be an uncomfortable experience if you're not white. Photo: DPA

So, what to do with all of this analysis? Well, it is actually simple. Let’s just keep sticking up for the women. As far as being a black man of African descent goes, the racists in Germany and elsewhere hate us anyway. They thought we were rapists and perverts and other assorted forms of sex attacker the second they set eyes on us. They don’t care about the women who were attacked in Cologne and Hamburg, except to prove the point that we are the animals that they always thought – or hoped – we were.

In return, I don’t care about them. Nor am I too bothered by the people who don’t want to sit next to me on the train. Fear of the unknown is a hard thing to unlearn. I am most concerned, by far, with the safety of the women who may now be more frightened than ever to enter public spaces.  I don’t think that women have ever felt particularly comfortable walking through crowds of drunk and aggressive men at night, regardless of the race of those men. But groups of young men of North African and Arab origin, whatever their intentions, will most likely endure more trepidation from women than before.

So here’s what I propose we do. Why don’t we just start with the premise that it is a woman’s fundamental right, wherever she is in the world, to walk the streets and not be groped. And why don’t we see this as a perfect moment for men, regardless of our ethnic backgrounds, to get genuinely angry about the treatment of women in public spaces: to reject with fury the suggestion that we are somehow conditioned by society forever to treat women as objects, condemned by our uncontrollable sexual desires to lunge at them as they walk past.

Let’s do our best to challenge the rampant misogyny which has gone on worldwide for far too long, and reject whatever lessons of sexist repression we may have been taught. Because women are tired of telling us about this, and exhausted of fighting a battle that for too long has gone overlooked.