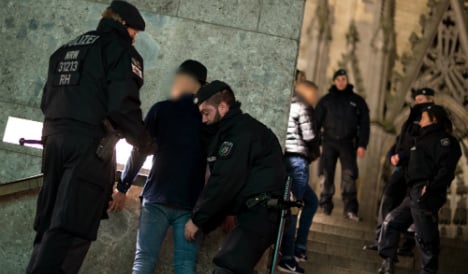 In scenes similar to those in Cologne, several women have reported New Year sexual assaults to police in Frankfurt.

In one case that took place shortly after midnight a group of around ten men encircled three women and touched them in a massively inappropriate manner, Spiegel reports.

The women reported the cases on Tuesday afternoon.

The men were of north African appearance who spoke in broken English with strong Arabic accents, police said.

“We didn’t know of the phenomenon where groups of men severely sexual molest women until now,” said a police spokesperson.

In another incident four women were assaulted by a group of three men who groped them. One of the women had her mobile phone stolen. As yet no description of the men has been published.

In Hamburg the number of women who have reported being sexually assaulted on New Year has risen to 39, police report.

Twenty six new cases of theft or sexual assault have been reported in the port city over the past 24 hours.

Details of sexual assaults in Hamburg have been slow to emerge. It seems, though, that the attacks took place in several spots, but were mainly focused on the Reeperbahn, the city’s best known night spot.

Victims have described terrifying scenes in the marauding mob in Cologne.

Steffi, 31, said she saw “countless weeping women” when she arrived at the station and was hit with a volley of sexist slurs shouted in German as she made her way through the crowd.

“I saw a girl… who was crying, with ripped stockings, her skirt askew – she was just wrecked,” she told the daily Sueddeutsche Zeitung.

“A young guy came out of the crowd and made vulgar comments. 'Can I help you? I know I can help you' he said with a strong accent and made obscene gestures with his hand. When she wanted to get away, he followed her. I told him to piss off.”

Cologne attackers 'have little to fear from police'

The Cologne sex attackers could feel emboldened to carry out new attacks because they have little to fear from police or the justice system, police union DpolG warned on Wednesday.

“It is highly uncertain whether in the case of the Cologne attacks even one conviction will be made,” union chief Rainer Wendt told the Passauer Neue Presse.

If the offenders are not caught “they will feel absolutely emboldened to commit such acts again in the shadow of anonymity,” he cautioned.

Anger has raged across Germany over the past 36 hours as details emerged of mass sexual harrassment of women in central Cologne on New Year's Eve by a large group of men police and witnesses say were of Arab or north African appearance.

Police in Cologne have received around 90 reports so far, with more from other cities including Hamburg and Stuttgart under similar circumstances taking the total up to 118.

The union chief also defended Cologne police from accusations from Interior Minister Thomas de Maizière that they had failed in their duty to protect.

“You can't criticize the police,” he said. “They simply were able to continually clear the area with the number of officers they had available.”

On Wednesday morning de Maizière told public broadcaster ARD that “the square [outside the cathedral] was cleared – and then later these events happen and they wait for emergency calls. The police can't work this way.”

With no arrests or even leads so far, authorities are struggling to make themselves heard when they insist there is no known link to recently arrived refugees.

“If there were asylum seekers among the perpetrators, that is far from a reason to place all refugees under general suspicion.”

But for many conservatives and people on the far-right, news of the events in Cologne has confirmed rumours coursing online in recent months of increasing numbers of sexual crimes by Muslims in Germany.

Almost as great a scandal as the attacks themselves has been the failure of national newspapers and public broadcasters to report on them until days after the event.

Little was heard of the New Year's Eve attacks beyond local media in Cologne until three days later on Monday.

It was “a scandal that it took days for the public media to take up the reports,” former Interior Minister Hans-Peter Friedrich said, accusing journalists of operating a “cartel of silence and lockdown of news”.

“A report on suspicion that's not covered by solid research isn't only incompatible with the principles of responsible journalism, but inflammatory in terms of security policy,” German Journalists' Union president Frank Überall responded.

And Tagesspiegel online editor Markus Hesselmann tweeted that “the lesson from Cologne is not to report faster, but to report more exactly, more sensibly, more reliably. All that usually means slower.”

“The news situation was clear enough. It was a failure that the 7pm broadcast [on Monday] didn't report the events,” said Deputy Editor-in-Chief Elmar Theveßen.

“The heute editors decided to delay the report… to get more time for interviews to complete it. That was a clearly mistaken judgement,” he added.