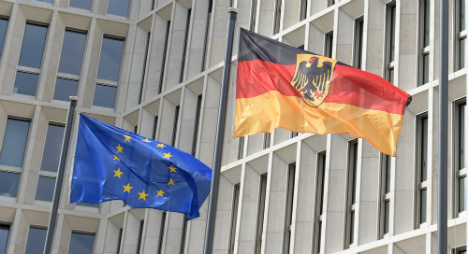 The German and EU flags flying side by side in Berlin. File photo: DPA

The meeting was called by the EU's asylum and migration minister Dimitris Avramopoulos after Sweden introduced mass identity checks on its border with Denmark for the first time in 50 years on Monday.

Denmark later toughened controls on people arriving in the Nordic country from Germany, to the dismay of leaders in northern Germany.

The first day of controls has seen just 18 people stopped, although three were arrested for human trafficking.

“The aim of the meeting is to improve co-ordination between the affected countries so as to ensure better management of the migration pressure,” a spokesman for the European Commission said.

Representing Germany will be Ole Schröder, a junior minister in the Interior Ministry.

Swedish authorities are demanding photo identification from all travellers from Denmark in a move that deals a blow to Europe's cherished passport-free Schengen system. Only passports, driving licences and Swedish national identity cards are being accepted by the authorities.

The measures are aimed at keeping out undocumented refugees and come after Sweden, which has taken in more asylum seekers per capita than any other European nation, said it could no longer cope with the unregulated flow of new arrivals.

Just hours after the initiative got under way on Monday, Denmark announced that it was introducing tougher controls on its frontier with Germany as a direct result of Sweden's decision.

“When other Nordic countries seal their borders it can have major consequences for Denmark,” Danish Prime Minister Lars Lokke Rasmussen told reporters in Copenhagen.

“It can lead to more asylum seekers,” he added.

The refugee crisis has been a major point of contention between Sweden and Denmark. Sweden took in over 160,000 asylum seekers in 2015, while Denmark has received just 18,000.

Germany took in more than a million refugees over the course of 2015, while many thousands of people crossed its territory on their way to Sweden and Denmark.

In November, Sweden tried to convince refugees in northern Germany to stay where they were rather than heading for its shores, saying that it had reached the limit of the number of people it could take in.