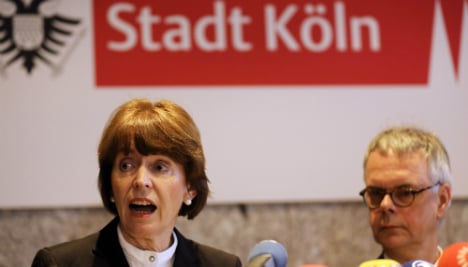 “At the moment we have no leads about the perpetrators,” city police chief Wolfgang Albers told journalists in a joint press conference with recently-elected mayor Henriette Reker.

But he and Reker were able to clear up some details which had become muddled in the wake of the huge amount of media attention to the attacks – attention that first began on Monday, or several days after the attacks.

Police explained that a large group of 400-600 young men had gathered around the cathedral starting at 9pm, drinking alcohol and loosing off fireworks.

As the group grew in number to around 1,000 people and became more unruly, police took the decision to clear them from the area – calming the situation until around quarter to one in the morning, although the men from the group were still present in numerous smaller gatherings around the city centre.

By 1am, the police commander on the ground had received several reports of sexual attacks on women.

He ordered all the officers in the area to gather around the station to warn, escort and protect women into the station, while federal officers did the same inside the station.

Albers specifically countered reports that the group of sex attackers had been 1,000 strong.

“There were not 1,000 perpetrators,” he said, but rather a gathering of people among whom were the perpetrators – although he could not say on Tuesday how many people were responsible.

Police had been “correctly positioned” and responded quickly to news of trouble, Albers said – despite the fact that the police report issued at 8.57am on New Year's Day had spoken of a “jolly atmosphere” in the city.

City fears for security at carnival

Questions remain about how to prevent the same thing from happening again at large events, particularly the traditional high points of carnival season in early February.

“I am convinced that more uniformed police at large events in the city will discourage a repeat of what happened,” a visibly moved Reker told reporters. “We have to make better use of the tools at our disposal.”

Cologne must remain a city “in which anyone can celebrate”, Reker said.

Reker insisted that there was “no evidence that we are dealing with people who have received accommodation here in Cologne as refugees.”

She added that women in the city should take steps to try and reduce the risk of being attacked – something that was quickly seized on for criticism by women online.

“I've noted the right behaviour manual for you: lads, don't be arseholes. Don't harass any women. You're welcome.” one person wrote.

“I feel obliged to ask Henriette Reker for the behavioural manual for men at the carnival,” another person tweeted.

Chancellor Angela Merkel released a statement saying that she was “disgusted” by the New Year's Eve attacks on women, saying that Germany, a state governed by the rule of law, must respond with a “tough answer”.

“Everything must be done to investigate the guilty parties as quickly and completely as possible and to punish them without regard to their background or origins,” Merkel's spokesman Steffen Seibert said.

The Chancellor joined a slew of her ministers who had chimed in over the course of the day, including Justice Minister Heiko Maas, who tweeted that “We won't accept the appalling attacks on women. All the perpetrators must be held to account.”

Interior Minister Thomas de Maiziere, meanwhile, said “that such a large number of people, apparently from a migrant background, could have carried out these attacks, is a new departure”.

But he, too, added that “this cannot be allowed to lead to refugees of any origin, who come to us for protection from persecution, being placed under general suspicion.”

Reker, who stood as an independent in city elections last year, won the mayorship while she lay in a coma after being stabbed in the neck by a man who assaulted her over her refugee-friendly policies.

She said that she “wouldn't back down” from her stance at her swearing-in in late November.