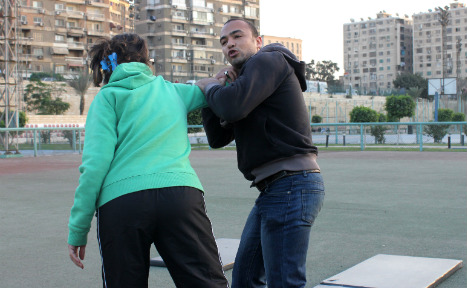 A woman in Egypt learns how to defend herself against a sexual attack. Photo: DPA

At the height of protests between 2011 and 2013, large numbers of sexual assaults took place in the square.

Groups of young men saw females who decided to leave the family home to protest as fair game for sexual assault.

This took place in a society where sexual harassment remains an everyday part of a woman’s life and where men are almost never prosecuted for such crimes.

Incidents of this nature are not confined to Egypt, but are a blight on large parts of the Arab world, where women are socially subjugated.

While there are differences between Tahrir Square and Cologne Cathedral – the Cologne attacks appear partly to have been diversions to enable theft – that men apparently of north African descent entered large crowds to sexually assault and even rape women – should set alarm bells ringing.

But no sober analysis of the influx of millions of people from the Middle East – the majority of whom are young men –  could fail to realize that certain behaviours prevalent there would be repeated here.

In the last few months, it has seemed that the authorities and the national media would rather sacrifice transparency for the sake of stability.

It was days before police gave full descriptions of the offenders in Cologne, despite a call for eyewitnesses. The national media also ignored the story until a wave of anger on social media made covering it unavoidable.

Official figures suggest that refugees are no more likely to commit sexual crimes than other sections of the population.

Interior Minister Thomas de Maiziere commented recently that “in general, the available recent trend findings show that refugees commit just as few or as many crimes as groups of the local population.”

But there is a growing body of anecdotal evidence of sexual crimes committed by new arrivals bubbling up from Germany's regional media.

In November a club in Bavaria started turning refugees away after a string of complaints of sexual harassment from female clients.

In Baden-Württemberg at least one hospital has hired guards to protect nurses who feel intimidated by the refugees they treat.

The Woman’s Council in Hesse claimed in an open letter to the state parliament in September that they have substantial evidence of sexual abuse, including forced prostitution, in refugee shelters.

In August a regional paper in North Rhine-Westphalia also reported police covering up a serious sexual crime. After hearing about the rape of a 13-year-old girl by a refugee, the paper enquired with police as to what crimes they knew of in the refugee shelters.

Although the case is being investigated by prosecutors, police reported that the only crimes were theft or fights caused by living at close quarters.

In the autumn police unions and women’s right groups both accused the authorities of playing down or even hiding cases of rape at refugee shelters.

“There is a lot of glossing over going on. But this doesn't represent reality,” police union chief Rainer Wendt said at the time.

The national media also seems to be in on the act.

Despite the seriousness of the allegations of police cover-ups and a pattern of evidence of sexual abuse, major news outlets stay well away from the issue.

This is hardly surprising in a media climate which is far more comfortable wringing its hands over the far right than offering objective reporting.

Newsrooms are at one and the same time scared of appearing racist and terrified of stirring up a latent racism they believe still exists in German society.

The Nazi past still casts a long shadow. But whatever the intentions, covering up the facts doesn’t help anyone.

Right-wing blogs are savvy enough to pick up on the discrepancies. When the national media don’t cover an issue which clearly troubles a great many people it feeds the perception spread by the far-right that they are the Lügenpresse (lying media).

If the centres of Cologne and other German cities – such as Hamburg, where reports of sexual violence on New Year's Eve emerged late on Monday – start to become a place where women no longer feel comfortable walking alone, people will quickly lose faith in the police.

Law enforcement and media alike would do well to learn from Norway’s experience.

As the New York Times recently reported, at first authorities tried to hide a link between rape and immigrant populations.

Now they offer lessons in the very basics of Norwegian law to new arrivals – like the fact that forcing a woman into sex is always illegal.

The seriousness of the crime in Cologne – and the fact that it has happened to German women rather than refugees – could signal a change in the national discussion. Hopefully it will start to win a few people back from the conspiracy theorists on the far right.

Jörg Luyken is a journalist at The Local Germany. Find him on Twitter at @jorgluyken.