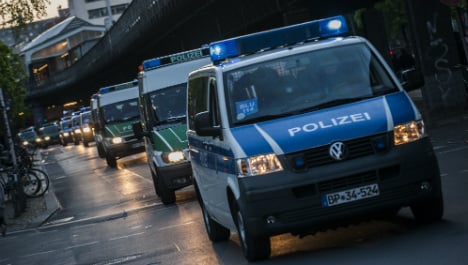 A convoy of Berlin police vans driving through the south-central district of Kreuzberg. File photo: DPA

Temperatures fell as low as -13C early on Monday morning as Germany was gripped in the first of what are expected to be several days of cold weather.

Until things warmed up in the early afternoon, police cars were out of commission because the cold caused “a defect in their diesel filters”, Police Union (GdP) spokesman Steve Feldmann told BZ.

“As far as I know it affects our new Opel Zafiras that were delivered to us just a few weeks ago,” Bodo Pfalzgraf, head of the Berlin chapter of rival union DpolG, told BZ.

It is not yet clear whether the new cars did in fact suffer from a technical fault or if they had mistakenly not been filled with winter diesel.

“If the second is the case, then there must be personal consequences,” Pfalzgraf said. “This is not a new problem, but one we've known about for years and that causes amazement among the general public.”

Some police garages have had their heating removed to save on energy costs.

“We still don't know why the cars aren't working,” police spokesman Stefan Redlich told BZ, although he insisted that they had all been filled with winter diesel – good down to temperatures of -22C – since November.

“According to information from our command centre, the cars being out of commission hasn't had any effect on distributing tasks and there was no delay in dealing with assignments,” Redlich insisted.