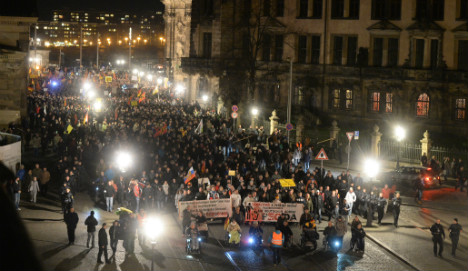 A Pegida demonstration in central Dresden in November. Photo: DPA

Visitors to the product page for the Pegida 'hymn' Gemeinsam sind wir stark (Together we are strong) were greeted with the new message on Wednesday evening.

“Amazon's profits from selling this song will go to a charitable organization for supporting refugees,” it read.

Pegida itself has said that its share of the proceeds from the wordless 'hymn' will go to “a good cause” – but hasn't said which.

But Amazon is the only party to the transaction which has so far put that promise into practise.

The tune appeared on Pegida's Facebook page on December 22nd, with a message encouraging the group's followers to enjoy “a patriotic Christmas celebration”.

Since then it has bolted up the charts, contesting the Number 1 spot with Adele by Wednesday.