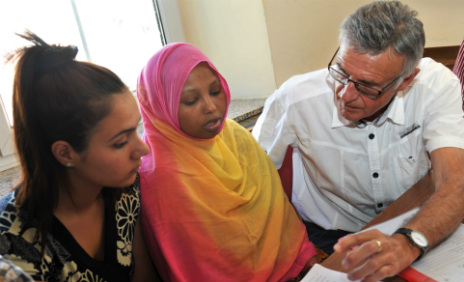 The numbers come from a survey carried out by national newspaper Die Welt, which looked at the budgets for the coming year for 15 of Germany’s 16 federal states. The exception was Bremen which has not yet published its spending plans.

Top spenders are set to be North Rhine-Westphalia and Bavaria, which have set aside €4 billion and €3.3 billion for refugees, respectively.

Hesse changed its budget plans from the summer up to the end up the year to include an extra €725 million for refugees, pushing the central German state’s total allocation for those seeking asylum up to €1.3 billion for 2016.

Saarland on the other hand is only budgeting €100 million in refugee help.

The budgets of the different states are hard to compare though, as some include extra costs of paying teachers, police and judges, while others only include costs of housing and feeding migrants.

The actual costs for the year could be even higher though, as current budgets are based on projections that 800,000 refugees would arrive in Germany in 2015.

However over 1 million people eventually made the journey to the Bundesrepublik, fleeing war and economic hardship in their own countries.

Of the €17 billion figure published by Die Welt, in some instances only around a quarter is set to be covered by the federal government, according to a deal reached in the summer whereby the government would provide around €4 billion in extra cash.

German Finance Minister Wolfgang Schäuble in November said he had budgeted €8 billion in additional federal spending for refugees for 2016.

The finance ministry in Saxony is now calling on the central government to take on all the costs of taking care of refugees.

“We don’t believe that the current arrangements made by the central government will cover the costs. We are calling for them to take over the entirety of the financing,” a spokesperson for the state government in Saxony told Die Welt.

Initial budgets for 2015 by the federal states put spending on refugees at the €5–6 billion range. But this figure soon became irrelevant as initial estimates of half a million arrivals were surpassed by a large margin.

A study by the Frankfurter Allgemeine Zeitung in September estimated total costs for 2015 to be around €10 billion.