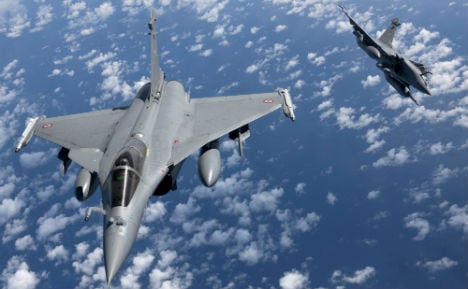 “Of course, it is no lesser crime to murder civilians in Syria with bombs than to open fire at random in restaurants and concert halls in Paris,” Left Party leader in the Bundestag (German parliament) Sahra Wagenknecht said.

“One of them is individual terror, the other terror carried out by the state.”

France and other EU allies have been the bombing terrorist organization Isis since the group claimed responsibility for the murder of 130 people in Paris on the night of Friday November 13th.

Germany sent tanker and reconnaissance planes to join missions over Syria, although none of its aircraft are directly bombing Isis fighters.

During the terror attacks in Paris gun men linked to Isis opened fire on civilians in restaurants, cafes and a concert hall, as well as outside the Stade de France national stadium, where a France–Germany football game was being played.

According to information from the Syrian Observatory for Human Rights, 299 civilians have died as a result of the US-led bombing campaign on Isis positions in Syria which started in September 2015. Of these, 81 have been children.

Wagenknecht said that “the violence is spiraling ever further out of control”, placing blame for the situation squarely at the feet of the West.

“Without the Iraq war there would be no Isis. Without the bombing of Libya and the destabilization of Syria, Isis would never have been this strong. The West – above all the USA – have created this monster with their wars.”

“The German government, which through its internal European policies has contributed to the rise of the far-right in France, now wants to do him [Hollande] a favour.”

“And due to the internal political maneuverings of European politicians, women and children are now dying in the streets of Raqqa – schools and hospitals are being destroyed.

“Of course that is terror – and it has ensnared many more victims than the barbaric attacks of Paris,” Wagenknecht concluded.