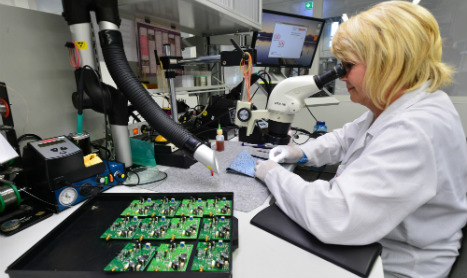 A scientist working on electronics in Hermsdorf, Thuringia. Photo: DPA

That meant that the country had maintained its 2014 standing, already a big improvement on 10 or 15 years ago when it was 10th in the table.

Germany was also well ahead of big European competitor nations, like Britain, France or Italy – placed at 12th, 18th and 25th respectively.

But the authors of the study suggest that this still isn't Germany at its best.

“It's justifiable to be a little worried about falling back if we don't become more innovative,” said Henning Kagermann, head of the Academy for Technological Science (Acatech) which collaborated on the study.

“In the overall ranking, Germany ought to be in the top three”.

The Innovation Indicator assembles data from 38 different sources to provide a single score for how innovative an economy is, including a country's science and research base, state support for innovation, education levels and many more.

“Germany may not be at the absolute top… as should be its aspiration, but instead is part of the directly pursuing group,” the authors write.

“Germany performs best in the Innovation Indicator in comparison with large economies, although countries like the US or Great Britain are to be found only slightly behind.”

How to catch up

But the authors suggest that there are obvious fixes that could see Germany shoot quickly up the table.

One area where the country lags is in spending by small- and medium-sized companies (SMEs) on research, with a share of just 16 percent of spending nationwide.

That's much less than the USA, where the figure is 19 percent, or Sweden where it's a soaring 27 percent.

“We can't conclude from the large number of global market leaders from the German Mittelstand (SMEs) that these companies are more innovative than in other countries,” said Acatech boss Kagermann.

Meanwhile, the authors also argue that the government could do more to support innovation in smaller companies.

Only half of SMEs even have a separate research and development (R&D) division – meaning that they may not qualify for government grants or subsidies.

“Access to these subsidy programmes must become simpler. Too many firms slip through the net,” Kagermann said.

More generally, the authors insist that attempts to improve innovation in Germany “should not be restricted to the narrow range of education, research and knowledge transfer.

“Rather, the innovation capacity of the German economy is influenced to a considerable extent by… labour, tax and energy policy. The question of how innovative activity can play a more central role in all economic and social policy decision-making processes must be addressed.”