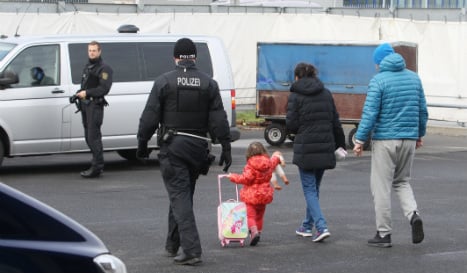 A family being escorted to a car on the way to the airport in Leipzig in November. Photo: DPA

By the end of November, there had been 18,363 deportations of failed asylum seekers, Interior Ministry documents seen by DPA showed.

That was almost twice as many as 2014, when there were 10,884 deportations during the entire year.

And some states were far more active than others.

And Hesse was close to a factor of three as well, sending 2,306 people back to their countries of origin versus 829 last year.

Germany's federal states, which are responsible for processing asylum applications, drastically stepped up deportation efforts over the course of the year in a bid to show concerned voters they had flows of refugees into the country under control.

That's why in the first four months of the year there were only 4,508 deportations, with the figure ramping up drastically as time went on.

In a speech last week, Chancellor Angela Merkel balanced a call for her party to back her refugee policy with a commitment to remove those denied asylum, saying that the country must prioritize those in greatest need.

There are now more than one million asylum applications recorded in German government computer systems, a Bavarian official confirmed recently.