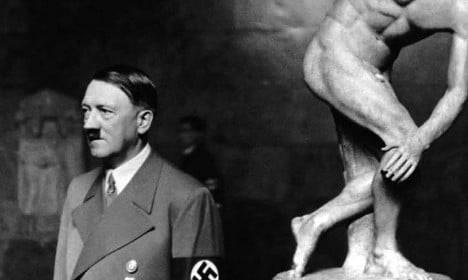 Generations of British schoolchildren have sung “Hitler has only got one ball” – the mocking song they learned from their parents and grandparents, who sang it during the Second World War.

Sung to the tune of Colonel Bogey's March, it goes:

Hitler has only got one ball
Göring has two but very small
Himmler has something similar
And poor old Goebbels has no balls at all.

It was composed as a propaganda song aimed at ridiculing Hitler and other Nazi leaders at the outbreak of the war.

But it appears that the comedians who came up with it may have struck closer to home than they realised while searching for inspiration.

After Hitler's arrest in 1923 following his failed Beer Hall Putsch, the future Führer underwent a medical exam, according to documents found in a Bavarian archive by University of Erlangen history Professor Peter Fleischmann.

At the Landsberg prison, Hitler was examined by Dr Josef Brinsteiner, who found that he suffered from “right-side chryptorchidism”, or an undescended right testicle, Fleischmann told Bild.

Normally men's testicles descend from inside the body into the scrotum during childhood.

But in some cases, one or both fail to descend – meaning that they atrophy and wither away rather than developing.

Unfortunately for Hitler, who was in otherwise perfect health and weighed in at a trim 78 kilos, that made the wounds of scatalogical British humour throughout the war – and well beyond the grave – particularly deep.

There is still no evidence, however, that one of the Führer's gonads ended up at the Albert Hall in London.