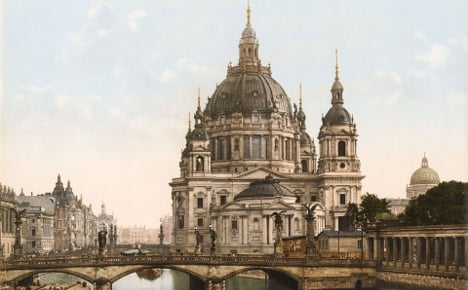 A view of the Berlin cathedral and the Frederick Bridge. Photo: Collection Marc Walter/Taschen

Newly published from Taschen, “Germany Around 1900” is a gigantic coffee-table book stuffed full of colour photographs from the turn-of-the-century Wilhelmine Empire.

They're from the collection of Marc Walter, who has been gathering “Photocroms” – colour images made using black-and-white negatives – for decades.

“He loved them and found them poetic,” co-author Sabine Arqué told The Local. “He started to buy them at a time when sellers didn't even know what they were. People just told him to take them away.”

The images date back to a time when a growing middle class in Germany and worldwide was beginning to indulge in travel for leisure, and many of them were taken explicitly to advertise destinations to tourists.

“It was the age, the moment, they had to create something for tourists,” Arqué´said. “The Photocroms were sold in retreats and tourist areas. Agencies like Cook and Norddeutsche Lloyd ordered whole series of them.”

But that purpose means that the Photocrom collection can't always be taken as a faithful document of the time.

“These are photographs, but they are treated like lithographs, printed with up to 14 colours sometimes, with an enormous amount of talent that went into it,” Arqué said. Holidaymakers at the Westerland beach on the North Sea island of Sylt. Photo: Collection Marc Walter/Taschen

“They aim to make you dream, to fantasize. Many of them are retouched. They removed and added things – one image might exist in several versions.”

And this multi-stage production process – which saw the Zurich-based Photoglob company buy up negatives from photographers and put them through their Photocrom procedure – means that it's often impossible to attribute a given photo to its creator.

One man might have pressed the shutter on the camera, with another developing it and yet another retouching it – and records got lost along the way.

But the important thing for Arqué is that the photographs have survived until now and made it possible to show a different side of the country to the world.

“As French people we wanted to make this face of Germany known, that so many of our compatriots and many of our fellow Europeans didn't know about.

“Germany was so stained with all of its sad history. We wanted to do something very beautiful about how it was before. The romantic side.”

As for Arqué's own favourite image? She was hard pressed to choose just one, instead ruminating from Nuremberg, through the Black Forest and up the Rhine to the beaches of the north coast, much as tourists might have done more than a century ago.

And we agree – every image of that vanished Germany seems calculated to inspire joy, longing and melancholy.

“Germany around 1900” is available to order now from Taschen.