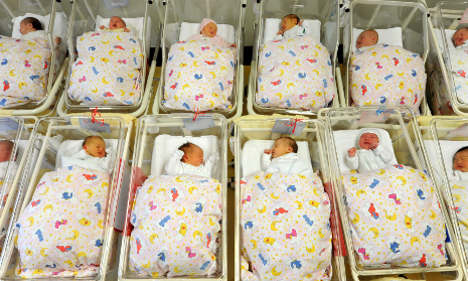 Data released by the Federal Office for Statistics show that in 2014, a woman of childbearing age had given birth to an average of 1.47 children, meaning that the birthrate was at its highest in the history of Germany since reunification in 1990.

Now it is clear that the birth rate has risen from 1.37 to 1.42 among German women and from 1.80 to 1.86 for women with foreign citizenship living in Germany.

The results were also positive across the German states, with each one seeing a plus in the birthrate.

Germany has one of the lowest birthrates in the western world and desperately needs young people to replace the ageing baby boomer generation who are set to leave the job market over the coming 15 years.

But Dr. Corinna Onnen from the German Society for Sociology told The Local that the rise in the birth rate was a “blip” and that it wasn’t sustainable.

“Government and industry are patting themselves on the back because they think the measures they have taken to create more family friendly work conditions are taking effect.

“But this isn’t true. Women have children because they want them, not because there are suitable work conditions,” she argued.

The actual reason for the increase is that the women who were born in the last mini baby boom in 1990 have now arrived at the age where they have children, Onnen said.

But because German women tend to only have two children at most, the sociologist doesn’t expect the increase in the birth rate to hold for any longer than a year.

“Looking back in another 20 years time this will be nothing more than a blip,” she asserted.