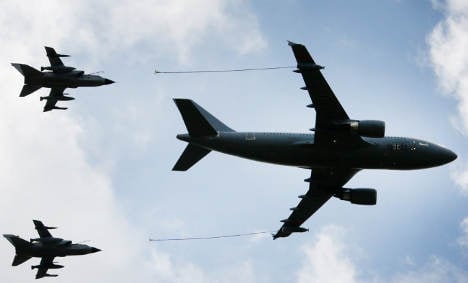 The airplane refuelled fighter jets from unspecified countries taking part in the international coalition against Isis, a speaker for the military said.

The Airbus A310 aircraft was airborne for a total of five hours.

The German government voted to take part in the international military campaign against Isis after the radical jihadist group claimed responsibility for the terror attacks in Paris on November 13 which left 130 people dead.

A German frigate is also acting as a guard ship for the French aircraft carrier Charles de Gaulle, from which French fighter jets are flying missions.

This is the third offensive military operation in the sixty year history of the Bundeswehr, after its participation in the Kosovo War in 1999 and the Nato mission in Afghanistan which ended in 2014.

As many as 1,200 military personnel are set to take part in the current mission.

The government believes that the military operation against Isis is legitimizes by a string of UN resolutions against the jihadist group and also through the UN Charter.

Die Linke, the left-wing opposition party however see things differently and are taking the government to the constitutional court in an attempt to put a halt to the military's action.