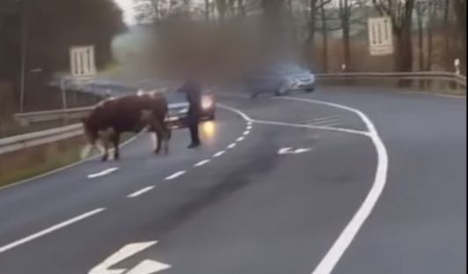 Two enormous bulls, each of them weighing around 900kg, escaped from a farm in Fuldatal in Hesse on Friday evening, leading local police to take extreme action to stop the animals in their tracks, the Hessische Niedersächsiche Allgemeine (HNA) reported on Tuesday.

But the way in which the police put an end to the life of one of the bulls raised questions about the effectiveness and safety of the operation.

In the first uploaded video an officer fires off at least seven shots into the animal with his service weapon. But the resultant injuries do not bring the beast to the floor, leaving it stumbling around on the busy intercity road.

In the second video another officer approaches the bull carrying a submachine gun. When the bull finally collapses, the officer steps away before firing off a final shot.

As the ordeal goes on the animal can be seen bleeding from the mouth as it struggles for survival.

In the background a row of cars waits only meters behind.

But he cautioned that this method was ineffective and that it was better practice to sedate the animal from a distance before using a bolt gun to quickly put it down.

Local police though, defended their actions, saying that the guns posed no danger to the public.

“The submachine gun was secured. It couldn’t fire off any [accidental] rounds,” a spokesperson told HNA.

“If a broken-out animal poses a danger to human lives, in other words an emergency situation develops, police are permitted to use live ammunition,” he added.