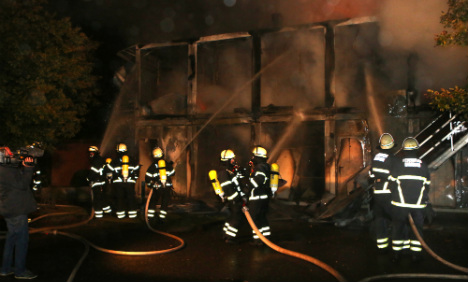 Police battle fire in a refugee home built out of containers in Hamburg in October, believed to be caused by arson. Photo: DPA

The vast majority of the 1,610 crimes committed against refugees and refugee housing so far this year stemmed from far-right political motives, police statistics released in response to a question from Green Party MPs showed.

That's almost double the figure identified in 2014, when 895 crimes of this type were recorded.

As well as direct attacks on refugees and their homes, the category includes spreading hatred online, property damage, and attacks on volunteers, politicians, and other people who take up the refugees' cause.

The number of crimes filed under the more general “foreigners/asylum” category by the police had reached 3625 by mid-November – again roughly twice last year's figure.

Most of the 817 cases of attacks on refugee homes covered property damage, “propaganda crimes” and hate graffiti.

But there has been a growing number of fire attacks and physical injuries to people staying in the homes.

Responding to the Greens' allegations that the police statistics didn't capture all the crimes, the Interior Ministry plans to add extra categories to its official reporting from January 1st.

They will cover attacks on asylum seekers, politically motivated clashes between refugees and attacks on volunteers and aid organizations.