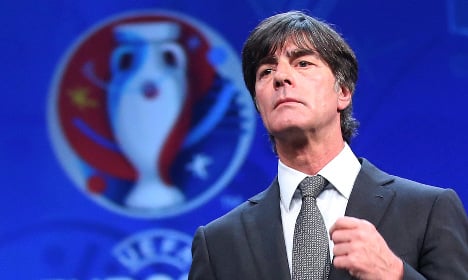 The world champions will take on Ukraine in Lille in their opener on June12 followed by Poland in Paris on June 16 and Northern Ireland, also in Paris, on June 21.

“It means we must be fully concentrated from the first game,” said Loew at the draw in Paris on Saturday.

“Poland have a lot of quality, but Northern Ireland and Ukraine, with the way they defend and counter-attacking game, can also be unpleasant to play.”

“We are the favourites and we want to win the group.”

Germany team manager Oliver Bierhoff was happy to avoid bogey side Italy in the draw.

“We certainly had some luck and we definitely wanted to avoid Italy,” said Bierhoff.

“But of course we have to take our group opponents seriously.”

Bierhoff, who scored the winner for Germany in the final to win the Euro '96 title, said he was personally pleased Germany would face Northern Ireland, against whom he scored a hat-trick in six minutes in 1997.

“I scored my fastest hat-trick there,” said Bierhoff, who scored allGermany's goals in a 3-1 win in a 1998 World Cup qualifier in August 1997 in Belfast.