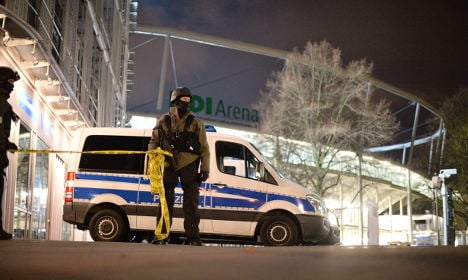 The game, which was due to take place in the northern German city of Hanover four days after the deadly attacks in Paris, was cancelled at the last minute over a bomb threat.

Federal prosecutors said in a statement that the suspect is believed “to have planned an attack on the football game on Nov 17, 2015, in Hanover together with other still unknown individuals”.

The man was not arrested, said prosecutors, declining to give other details of the suspect.

Der Spiegel magazine reported that investigators had found a suspicious video following the security alert, which led them on the trail of a 19-year-old student.

The 10-second sequence which appeared on Instagram two days after the match was due to have been played, features a young man wearing a service vest and was apparently filmed in the Hanover stadium after it had been evacuated over the bomb scare.

On it, the man is heard saying “pray for Raqa”, the Syrian stronghold of the Islamic State in Iraq and Syria (ISIS) group, Spiegel reported.

The young man's teacher also reportedly told police that he had been radicalised and had expressed his wish to travel to Syria.

The Hanover match was scrapped just 90 minutes before kick-off, and Interior Minister Thomas de Maiziere – who had been due to attend the game along with German Chancellor Angela Merkel – later said the game was cancelled “to protect the population”.

It further shook Germany's players and coaching staff, who had already been under shock over the attacks in Paris, as they were playing at the Stade de France when three loud blasts went off just outside the stadium.

The team ended up spending the night at the stadium before driving straight to the airport for a flight back to Germany, rather than risk driving to their hotel in downtown Paris.