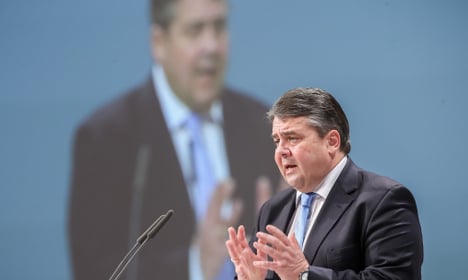 Chancellor Merkel's junior partners in her left-right “grand coalition” government have long been stuck in the doldrums, currently tallying only about 25 percent support among the electorate.

The country's second-strongest party trails Merkel's conservative Christian Democrats (CDU) by 10 to 12 points even as the migration crisis has eroded her support, particularly among her own rank-and-file.

The SPD's embattled leader, Economy Minister Sigmar Gabriel, a dynamic public speaker but little-loved in the party, is due to address the around 600 delegates meeting in Berlin and will stand for a fourth term as SPD president.

He has been blamed for the stagnation of the venerable party, now in its 150th year, and for a failure to snatch issues back from the master tactician Merkel, often credited with occupying the middle ground in German politics.

“I think that we are too much in Merkel's shadow and honestly, I don't know how we'll emerge from it,” 19-year-old SPD supporter Clara Klapprodt told AFP as the congress kicked off Thursday.

The most dramatic example of that poaching of key issues has been in the refugee crisis — the defining issue of German politics this year.

By embracing an open-doors policy for Syrians fleeing war and terror, Merkel has won over many voters from the traditional left who might never have considered voting CDU.

The eurozone debt crisis also presented challenges for the SPD.

While Merkel backed a fresh bailout for Greece under strict conditions over the summer, Gabriel seemed to struggle to find a firm position, confusing supporters and opponents alike.

In the end, Gabriel, “who is targeting the centrist electorate”, opted not to challenge the pro-austerity line favoured by the chancellor “knowing that most Germans are very sceptical when it comes to Greece”, political scientist Oskar Niedermayer said.

Recognising his weak support in the party, Gabriel announced in October that he was willing to hold a party referendum to decide who will lead the SPD into the 2017 general election.

Merkel, who is holding her own party congress from Monday, is expected to decide next year whether she will stand for a fourth term at the helm of Europe's top economic power.

In the run-up to the party congress, SPD vice president Ralf Stegner insisted that the mighty Merkel could be defeated: “12 years at the chancellery: that's enough!”

But Klapprodt admitted she had little confidence her party could win the 2017 general election.

“To do that, we would need a real vision capable of winning people over,” she said.

However another SPD supporter, Wilhelm Drabke, said he was keeping hope alive but that it would take another candidate, popular Foreign Minister Frank-Walter Steinmeier, to topple Merkel.

Steinmeier already took on Merkel once, in 2009, leading the party to its worst showing since 1949 with just 23 percent of the vote. It remains unclear whether he would be willing to risk reliving the experience.