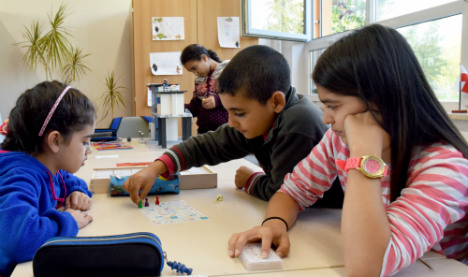 Refugee children in class at a school in Potsdam, Brandenburg in October. File photo: DPA

Police in Leipzig said that a group of 13- and 14-year-old German children attacked the refugees, spitting on them, throwing stones, shoving and slamming a door shut on them.

The youngest victim, a nine-year-old girl, suffered a splintered bone in her arm which had to be put in a cast.

A second girl, 14, suffered crushing injuries which had to be treated by a doctor.

Officers are investigating the attackers on suspicion of serious bodily harm.

The group of German kids were the same pupils believed to be behind a series of five physical and verbal attacks against the refugee children over the course of the month that they have been attending school for a “German as a third language” class.

“It would be questionable if teachers and the school leadership didn't think it useful to talk with the parents of the attackers,” police said in their statement.

“School is no place where a possible far-right political atmosphere is the norm,” they went on.

“The Saxon education authority, school leadership and police HQ in Leipzig are unwilling to helplessly watch as a new generation of dim young nationalists grow up, just because their parents may tolerate or even encourage it,” they added.

The school is currently considering measures to make classes safe for the refugee children and how the perpetrators should be punished.

Meanwhile, a group of 30 people attacked a bus bringing refugees to a home in the small town of Jahnsdorf, near Leipzig, on Thursday evening.

One of the bus' windows was also broken.

The asylum seekers were brought to a different accommodation centre and police are investigating a breach of the peace.