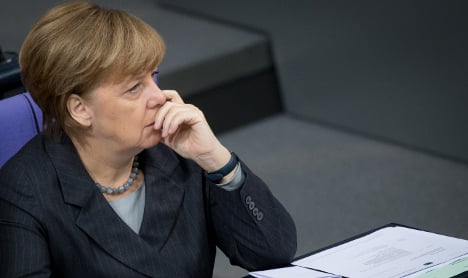 Just a year ago, Merkel basked in her unchallenged power at a CDU congress in Cologne, winning re-election as its chief with a whopping 97 percent in what she called an “overwhelming vote of confidence”.

And although Time magazine named her 2015's “Person of the Year” while the Economist last month called her “the indispensable European”, her closest allies at home have been less enamoured of late.

The two-day meeting in the southwestern city of Karlsruhe will see Merkel try to calm fears among delegates that the asylum seekers represent a grave threat to the nation's security and prosperity.

She will fight a growing faction of the party calling for a unilateral national cap on asylum seekers, her advisors say, favouring instead a long-shot bid to establish EU-wide contingents for member states.

Although Merkel is not up for re-election as  leader, observers will be watching closely to see whether the party stands firmly behind her ahead of a decision on whether she will carry the CDU banner into the 2017 general election.

News website Spiegel Online said Merkel, now in her 15th year as party chief and 10th as chancellor, “who so long was untouchable, will have a tough time of it”.

The Süddeutsche Zeitung said Merkel's speech to the congress on Monday would be “one of the most important of her career”.

The congress comes ahead of key elections in three states next March that have already been cast as a test of Merkel's grip on power.

The CDU has regained its footing in opinion polls recently to tally between 35 and 37 percent. Its partners in Merkel's “grand coalition” government, the Social Democrats, have stagnated at between 23 and 25 percent as they convene their own party congress this week.

But anxiety about the refugee issue has resuscitated the right-wing Alternative for Germany (AfD) outfit, for months considered a non-entity and now polling at around 10 percent nationally.

Voter surveys indicate the AfD, which recently demanded Merkel step down as chancellor, has a solid chance of winning seats in the state elections.

Although the mainstream parties have ruled out forming a coalition with the AfD for now, it represents a destabilizing force to the right of the CDU and will complicate the building of ruling majorities.

In the face of open dissent among her allies, Merkel has taken action to “control, impose order on and reduce” the influx of newcomers.

This included an EU deal with Turkey to stem the flow of refugees into Europe, and a tougher German screening process for anyone seeking refugee status, also for Syrians who for the past year had been exempt from personal interviews.

The director of the Centre for Applied Policy Research in Munich, Werner Weidenfeld, said most Germans believed Merkel had taken the right decision in adopting a humanitarian stance in the face of so much desperation.

However, he said she had failed to show voters a long-term roadmap to deal with the issue, robbing them of the sense of security she had imparted for the past decade.

“That magic sense of stability is gone,” he said. “The problem is that the government and the chancellor insist on crisis management as they go along – something that long worked brilliantly.”

But with daunting problems such as the eurozone debt crisis, refugees and terrorism, “there does not seem to be a strategy”.

“That is what voters and her party need to hear from her now,” he said.

A close party ally noted that despite the evident frustration with aspects of Merkel's stance, he saw little appetite to topple her.

“They say 'I don't know whether she'll manage (with the refugee crisis), but who else possibly could?'”