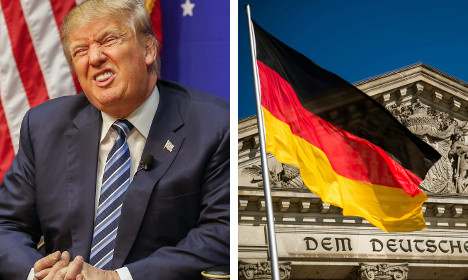 The Chancellor beat out Trump to win the coveted TIME magazine Person of the Year award on Wedensday December 9th 2015.

Trump immediately made his feelings clear with an angry tweet that Merkel was “ruining Germany”.

The two couldn't be more different as politicians.

Merkel prefers a softly-softly approach where she feels out the public's mood on an issue before making a decision.

Trump, meanwhile, likes to make outrageous, provocative statements and then attack anyone who disagrees or complains as a fraud or a fool.

A big part of Merkel being named person of the year was her decision in August 2015 to allow refugees fleeing conflict in Syria free passage into Germany from Hungary.

That didn't go down well with Trump, who famously called for all Muslims – not just Syrians or refugees – to be banned from the USA.

There are sizeable Muslim communities all over Germany, and up to a fifth of people in the country have some kind of link to migration in their background.

German leaders of all political stripes (other than the Alternative for Germany) have insisted that Islam “is a part of Germany” – something Trump is unlikely to say about the USA.

The bizarrely-coiffed president-elect is also a big fan of British columnist Katie Hopkins, who compared migrants to “cockroaches” and advocated using “gunships” to turn them back in an infamous column for the Sun newspaper.

Thank you to respected columnist Katie Hopkins of Daily https://t.co/LgtY0qdv9U for her powerful writing on the U.K.'s Muslim problems.

3. Germany's love of the environment

Germans love nothing more than being green – it's one of the big things all the big political parties agree on, and the Green party is backed by around 10 percent of voters.

Across the country, people recycle everything from glass bottles to electronic waste.

And the government has thrown its full weight behind the “Energiewende” (energy transition) policy which aims to cut emissions by 95 percent of 1990 levels by 2050 – as Merkel reminded the world at the COP 21 conference in Paris last year.

This very expensive GLOBAL WARMING bullshit has got to stop. Our planet is freezing, record low temps,and our GW scientists are stuck in ice

In Germany, people are often prosecuted for the crime of inciting people to hatred – something we've argued against at The Local.

It's made far-right movements, such as anti-immigration, anti-Islam Pegida, very wary about the words they use to express their aims. A police officer clashes with protesters carrying a banner at a Pegida demo in Munich in November. Photo: DPA
You can also get into serious trouble with the authorities for saying or doing something that “endangers the basic democratic order” of the country.

That's not something Americans like Trump have to worry about, thanks to the First Amendment to the US Constitution, which guarantees freedom of speech to even the loudest of mouths.

Sorry losers and haters, but my I.Q. is one of the highest -and you all know it! Please don't feel so stupid or insecure,it's not your fault

Germany has some of the strictest gun laws in the world – you have to prove that you need a gun for a good reason, such as hunting or target shooting.

Self-defence does not count as a necessity, and cases where homeowners shoot intruders, for example, regularly end up in court.

Gun owners also have to keep their weapons safely locked away in safes.

Despite the strict rules, Germany has the fourth-highest rate of gun ownership in the world behind the US, Switzerland and Finland, with 5.4 million legal guns for its 80 million people.

Trump, meanwhile, regularly expresses his support for gun ownership – and provoked angry reactions for point-scoring in the wake of the Paris Charlie Hebdo attacks in January when he suggested that the victims might have survived if they had guns.

“I have a very strict gun control policy: if there's a gun around, I want to be in control of it.” – Clint Eastwood

6. Germany is standing up to Russia

In contrast to other Republican presidential contenders, Trump has regularly said that he thinks he'd “get along” with Russian leader Vladimir Putin.

That might not sit too well with Merkel, who has faced down the Russian leader over his annexation of the Crimea from Ukraine and support for pro-Russian rebels in the east of the country. Merkel and Putin with the Russian leader's dog Koni in 2007. Photo: DPA

There's surely no love lost between the two thanks to the past, either – Merkel grew up in former East Germany, under the thumb of the Soviet Union, while Putin worked as a KGB officer in Dresden until the fall of the Berlin Wall.

Putin famously attempted to intimidate Merkel using his dog at a summit in 2007, marking a particular low in the pair's relationship.

Germany and the eagle have an association going back almost 1,000 years, to the Holy Roman Empire. A double-headed eagle from the Holy Roman Empire from the year 1605. Image: Wikimedia Commons

And the noble bird remains the symbol of the Federal Republic today – although it's had a bit of a makeover since its darkest moment as the emblem of the Third Reich. The modern eagle emblem of the Federal Republic of Germany, or “Bundesadler”. Image: Wikimedia Commons

Donald Trump, meanwhile, did his best to look patriotic in a photo shoot with the American national animal, the bald eagle – only to find the airborne predator snapping angrily at him (or his hair).

Germany's undisputed queen of supermodels has had her own run-in with Trump.

In August 2015, The Donald decided to use a New York Times interview to declare that the blond bombshell was “no longer a 10”.

But the Germany's Next Topmodel host quickly put together a Twitter riposte under the hashtag “HeidiTrumpsTrump”.