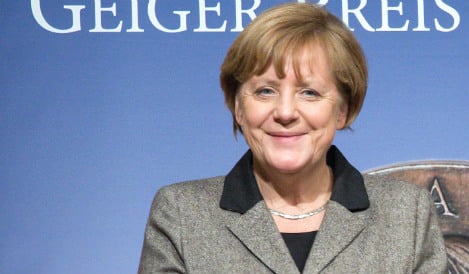 “For asking more of her country than most politicians would dare, for standing firm against tyranny as well as expedience and for providing steadfast moral leadership in a world where it is in short supply, Angela Merkel is Time's Person of the Year,” wrote editor Nancy Gibbs.

Merkel is the fourth German Chancellor to win the magazine's annual accolade, following in the footsteps of Konrad Adenauer (1953), Willy Brandt (1970), and – regrettably – Adolf Hitler (1938).

She is also the first woman to be honoured with the title in 30 years.

Merkel is herself a “refugee from a time and place where her power would be unimaginable”, Gibbs wrote of the Chancellor's youth in the Communist German Democratic Republic (GDR).

“No other Western leader grew up in a stockade, which gave Merkel a rare perspective on the lure of freedom and the risks people will take to taste it.”

Gibbs notes Merkel's lack of political ostentation concealing depths of political nous, calling her a follower in the footsteps of Social Democratic Chancellor Willy Brandt's “politics of small steps”, saying it's what Americans would call “leading from behind”.

But that changed in 2015, with the German leader facing up to multiple simultaneous crises as Russia began gobbling up Ukraine, Greece threatened to crash the Eurozone and the continent panicked over hundreds of thousands of incoming refugees.

“Each time Merkel stepped in,” Gibbs writes. “This time, the woman who trained as a quantum chemist did not run the tests and do the lab work: she made her stand.”

In the face of racist demonstrators and criticism from at home and abroad, she has maintained her belief in the nation's ability to get it done with what has become her catchphrase – “wir schaffen das” – “we can do this”.

“The Chancellor is asking a great deal of the German people, and by their example, the rest of us as well,” Gibbs concludes.

Merkel's spokesman Steffen Seibert said that Merkel would see the TIME honour as “an encouragement to continue her work for the good of Germany and Europe”.

.@RegSprecher says Merkel will see @TIME award as 'an encouragement to press on with her political work for the good of Germany & Europe'.

One MP from Merkel's own party tweeted that Merkel's win was “an honour for all of German poltics”.

And US President Barack Obama added his own congratulations a few hours later.

Herzlichen Glückwunsch to my friend and Time's Person of the Year, Angela Merkel! Thanks for your moral leadership and strong partnership.

Some German commentators were quick to joke that Merkel was now more popular in the USA than in her home country.

Merkel has come in for harsh criticism from conservative quarters over her decision back in August to welcome refugees unreservedly.

But analyst Maxime Sbahi pointed out that the Chancellor still enjoys popularity ratings that are the envy of any other western leader.

CHART: True, #Merkel is a bit less popular. But look at these levels! Makes any other leader look pale. #lasttweet pic.twitter.com/Tt5gT2mgYl

Others joked about the fact that HItler was a previous winner of the award, with Westdeutsche Rundfunk tweeting that Merkel followed Adenauer, Brandt, and “another one”.

The magazine's choice clearly needled runner-up Donald Trump, who tweeted on Wednesday that they had picked Merkel, who he claims is “ruining Germany”, rather than himself, “the big favourite”.