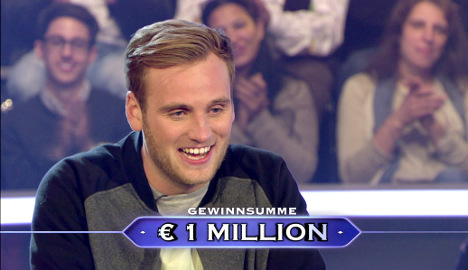 Student Leon Windscheid winning the German version of Who Wants to be a Millionaire. Photo: RTL/DPA.

The puzzling final question that made Leon Windscheid a newly minted millionaire on Monday night had to do with a puzzle itself.

To figure out the right answer, Windscheid used the help of Jauch's hands to model the Rubik's Cube before he gave his solution – 26.

Upon hearing that the answer was correct, Windscheid jumped out of his chair to cheer with the audience and then hugged Jauch, lifting him off the ground.

“I still cannot believe it. A one with six zeros. It feels like a very crazy dream,” he said. “In such a situation, you don't feel so sure about yourself. The excitement is too much. But in the end I was so certain, that I wouldn't have been able to forgive myself if I didn't risk it.”

The psychology student, who turned 27 on Tuesday, said we would still live life in a “totally normal” way, but does plan to use the money to finance his doctorate, as well as to take a vacation and buy a “party boat” which he will name after Jauch.

Windscheid became the eleventh person to win the show, with the last winner taking home the million in October last year.

Another student contestant on the show gained some notoriety earlier this year, but for her failure rather than her success.

The 20-year-old became the worst participant in the show's 15-year history when she failed to make it past the first question.