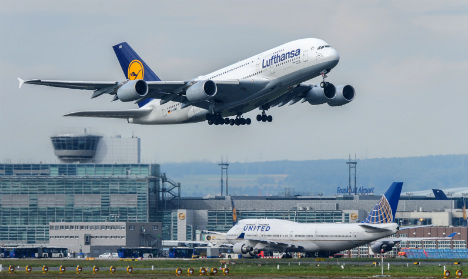 A Lufthansa Airbus A380 lifts off from Frankfurt airport. Photo: DPA

“A passenger got up and tried to do something at the door, but was stopped by crew members and other passengers,” said airline spokesman Andreas Bartels.

“The passenger was then restrained for the remainder of the flight in his seat and handed over to the authorities in Belgrade,” he said.

“It was a normal door, which of course cannot be opened in-flight… it was not the cockpit door,” he said. “The safety of the flight was not jeopardised and the flight landed safely in Belgrade”.

Bartels declined to provide information on the identity of the passenger or his nationality, or what he said during the incident.

Serbian state-run television reported that police had arrested a Jordanian man after he tried to forced his way into the cockpit of the Lufthansa flight.

The man had suddenly got up during the flight, banged on the cockpit door and demanded to be allowed to enter, threatening to open one of the plane's doors while it was flying over Austria, Serbia's RTS television reported.

The man, whom Serb press said was called Laken and had a US passport, had cried out that he wished to join Allah along with all the passengers, RTS said.

He was overpowered by flight crew and members of a Serb handball team who subdued him until the flight landed in Belgrade where he was arrested, the report said.