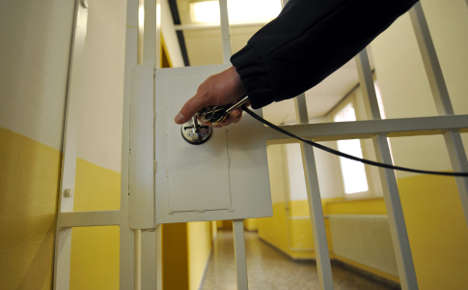 While to many it may sound like something out of Dickens novel, the majority of German states still force prisoners to work for state-run companies while they do their time behind bars.

At the JVS Butzbach prison in Hesse, around 40 prisoners build “modern and effective” office furniture in the largest publicly-owned factory in the state.

In the product catalogue a desk is listed as costing €735, while a standing desk comes in at a cool €592.

While these certainly don’t sound like Ikea prices, it appears that the people actually making furniture see little of the reward.

Oliver Rast from the Prisoners' Union told The Local that the average inmate earns €1.50 an hour – a sum that amounts to around €200 for a full month of work.

Since Tuesday, workers at the JVA Butzbach have gone on hunger strike and a so-called Bummelstreik – or go-slow – to protest the conditions of their labour.

Rast says that miserable wages are not the only problem. Prisoners are also denied all forms of welfare payment outside unemployment contributions – and even these are only paid at two-thirds of the rate of those for a free German citizen.

The Butzbach protesters are demanding payment at the national minimum wage (currently €8.50 per hour), plus pension contributions and the right to freely organize in trade unions.

“It is an absurdity that the state expects ex-convicts to reintegrate into society, yet drives some of them immediately into old-age poverty upon their release, because they have never been paid pension contributions,” Rast says.

The right to organize in a labour union meanwhile is enshrined in the Constitution for “every person”, he says.

Article 9 of the German Constitution indeed states that the right to form associations to safeguard and improve working and economic conditions shall be guaranteed to every individual.

But the fact that prisoners are forced into work means that they lack one of the most basic rights of a trade union member – the right to lay down your tools in protest at your work conditions.

It is for this reason the prisoners have stopped eating and started working slowly – it is the only legal means at their disposal.

“When they go on hunger strike, the prison is not allowed to make them work for medical reasons,” Rast explains.

If they were to refuse to work, the prison would have various punishments at its disposal, such as tighter controls on their mail, the cancellation of visiting times, and taking away other privileges outside their working hours.

‘Paying off a debt’

The Justice Ministry in Hesse, though, see things quite differently.

René Brosius, press speaker for the Ministry of Justice, told The Local that the state makes no profit from the businesses they run off the back of prison labour. Instead the money made from sales goes into reducing the considerable costs imposed on the state by housing and watching over often dangerous criminals.

“The prisoners in JVA Butzbach are normally serving long sentences, some of them for murder,” the spokesperson said.

The Justice Ministry prefers to see it as “reducing the costs that they are imposing on the German tax payer” rather than actual work.

Each prisoner costs the state of Hesse around €100 per day, and the money made by the state-run factories goes into reducing how much of this comes out of the tax bill. No profit is actually made off the factories' products, Brosius said, and the money made in no way covers the whole bill of feeding, housing and guarding prisoners.

He also argues that in prison, convicts receive health care “equal to or better than” what would be available to them outside. When they reach retirement age they will also receive the minimum state benefit, he points out.

“Why should the wider community pay [the pensions] of those who are themselves at fault for the fact that they can't make their own pension contributions?” he asks.

The right to organize, enshrined in Article 9 of the constitution also has exceptions, he argues, for example for organizing a Nazi Party.

But Rast rejects this line of argument. He points out that if prisoners were given the minimum wage, then a section of this salary could be taken away as rent – but what the rent for small, dingy prison cells is would have to be negotiated.

Moreover forcing inmates to pay for their own imprisonment is doubling their punishment, he argues.

“They are already being punished through the taking away of their freedom,” he says.