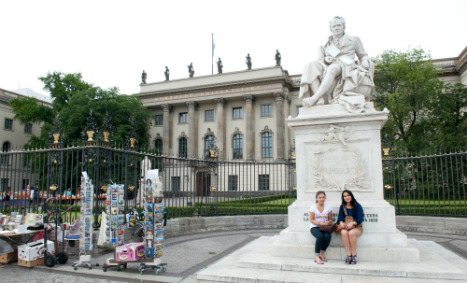 Two students sit beneath the statue of Alexander von Humboldt outside the Humboldt University on Unter den Linden. Photo: DPA

The German capital placed 9th on the QS Best Student cities 2016 ranking published on Tuesday, behind a slew of world cities including Paris, Tokyo, London and Hong Kong.

Analysts looked at five categories to come up with an overall score for each of the 75 cities in the table: university rankings, student population and diversity, desirability and safety, availability of jobs after graduation, and affordability.

“Germany's capital city can stake a credible claim to being one of the coolest cities in the world,” the authors wrote, calling it a “major centre of design, fashion, music and art to rival even New York or London”.

They were particularly impressed by Germany's free access to undergraduate education – even for international students.

The capital's offering of many courses in English also came in for praise, as did its low cost of living, “liberal atmosphere” and “happening party and music scene”.

As for studying, Berlin also boasts some of the best universities in the world – although QS' opinion was less generous than October's Times Higher Education (THE) rankings, which put the Humboldt University and Free University at 49th and 72nd place worldwide respectively.

Berlin leapt seven places up the list to claim its place in the top 10, leapfrogging Munich – the only other German city in the top 75, climbing from 14th to 11th place.

While the QS authors loved the Bavarian capital's “affluence and vibrancy” – as well as its status as the “beer capital of the world” and high quality of life – they do point to the higher costs of living than Berlin.

Nevertheless, with excellent universities in the shape of the Ludwig-Maximilian University and the Technical University – at 29th and 53rd in this year's THE global ranking – spending some of your undergraduate years down south is likely to be more than worth it. 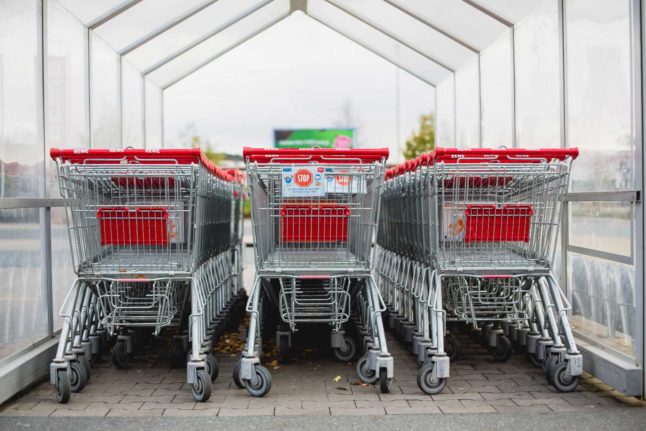 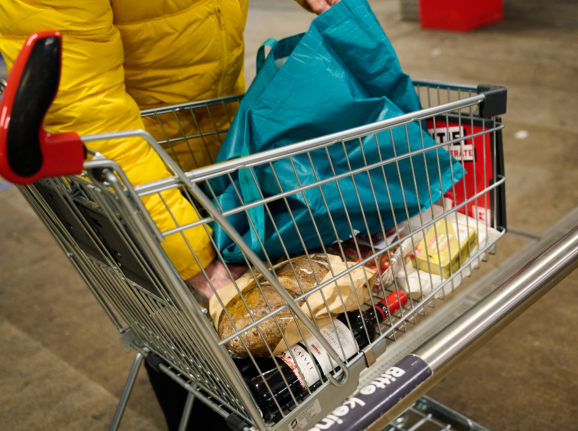 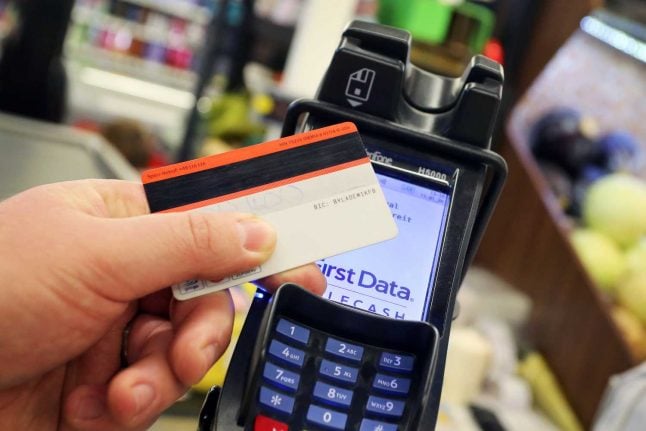 Despite a strong economy and a love of tech and gadgets, Germans retain a stubborn love of paying with cash.

As reported by The Local Germany on Thursday, 2020 was the first time in German history where more payments have been made with card than cash – a phenomenon which has been accelerated by the pandemic.

READ: Why Germans are finally choosing cards over cash

But according to readers of The Local Germany, the change is long overdue.

A total of 90 percent said their preferred method of payment in Germany was electronic – i.e. card or phone payments – while only 8.8 percent preferred to pay in cash.

As was noted in the study, the pandemic has accelerated Germany’s move towards cashless payments.

This was also supported by Local readers, half of which said they paid more often with electronic means due to the pandemic.

Just under half, 47.5 percent, said the pandemic hadn’t shifted their payment habits.

“If cash is a requirement, why aren’t there more ATMs?! In NZ we have ATMs in petrol stations and outside supermarkets,” she said.

‘I’m American’: why do you prefer to pay with card?

Many of our readers were emphatic in their support of card, saying they would opt to make payments with card whenever and wherever this was possible.

Aaron, from Perth, Australia said he would choose businesses based on payment methods.

“I have always paid with card and tend to avoid businesses that do not offer the service,” he said.

Sunil said he “wants to get rid of useless, small denomination coins”.

The sentiment was shared by Ahmed from Egypt.

“I would really like to see contactless payments in every car park in Germany; I hate the struggle with coins!” Foreigners said they were particularly fond of card – and found the adjustment difficult.

When asked why card payments were preferred, one respondent simply said: “I’m American.”

Jon L agreed: “I’m an expat from the US… In the US I never had cash, now I need it everywhere I go.  It’s annoying.”

Syed from Pakistan said the pandemic was a major reason to switch to card.

“It surprises me that people keep the line blocked while counting their change,” he said. “This is so weird, just pay with the card and then there will be less people standing in the queue and less chance of being exposed to the virus.”

“I used to use cash wherever possible but due to Covid have moved to contactless payments to reduce the risk of handling cash,” he said.

An overwhelming majority of our readers – 92.5 percent – said they would like to pay more often with electronic means than they currently do.

Jon Jardine, from the UK, said “My local bar owners thought me paying with my Apple Watch was witchcraft.”

Peter M, also from the UK, said knowledge of contactless payments was minimal – even when a retailer was set up to accept them.

“Certainly I’ve noticed that card payment is now much more commonly possible. And shsssh, even contactless, which was totally alien to German shopkeepers until this year,” Peter said.

“I found myself having to explain to checkout operators how it worked. They were boggled that the mere act of waving my card above their terminal could settle my bill.”

“When visiting the country of Georgia last summer, I realised the German electronic payment system is in the dark ages.”

Security and the need to protect privacy are frequently given as reasons for Germany’s preference for cash payments, although few of our readers agreed.

93.7 percent of respondents said they were not concerned about security when paying by card in Germany.

One of our readers, Syed, said he didn’t mind if anyone looked into his transactions.

“I even buy cannabis from my credit card, I don’t care if anyone is watching my spending habits.”

No love for EC card

Even when card payment was accepted, our readers had little positive to say about Germany’s preferred card-payment method: the EC (Electronic Cash) card.

Jesse Parker, from Colorado in the US, said he found the EC card odd.

“It’s silly.. Especially EC vs Debit. Who pays for their doctor with cash? Maybe I’m just used to 3,000 doctor bills in the US.”

Dirk V, from South Africa, shared Jesse’s concerns. “The insistence on an EC card. Why? Oh Why?”

Andrew, from France, summed it up clearly: “The EC Card needs to die!”

Ahmed from Egypt agreed: “EC card should be completely deleted from history!”

Scott, from the US, said the poor EC card was no laughing matter. “EC card is a f***ing joke,” he said.

‘Remember the Weimar Republic’: cash still king for some readers

Not all readers thought plastic was fantastic, however.

While only around one in 10 (8.8 percent) preferred cash payments, those who were fans of cash were particularly enthusiastic.

JM, from Ireland, said the pandemic hadn’t shifted his payments habits – because he had no fear of the virus.

The curiously named ‘Anon’ had a historical reminder for card lovers. “Push for cashless society should be illegal. Remember Weimar Republic!”

How will we pay in the future?

While cash is still popular in Germany, history is clearly trending in the direction of cards – and that’s been sped up by the impact of the pandemic.

Our readers agreed, with two thirds saying the future was plastic.

Others, such as Alan P from South Africa, were not so optimistic.

“I have almost been chased out of a shop for offering a card! I think there is little chance of changing the German mindset over the use of cards; they simply bury their heads in the sand.”

The survey was conducted via Google Forms on a story published on The Local Germany’s website on Monday, 14th September. A total of 80 responses were received. Thank you to all readers who responded – you all helped us put this story together.

COST OF LIVING
What are the current rules for Swiss cross-border shopping in Germany? 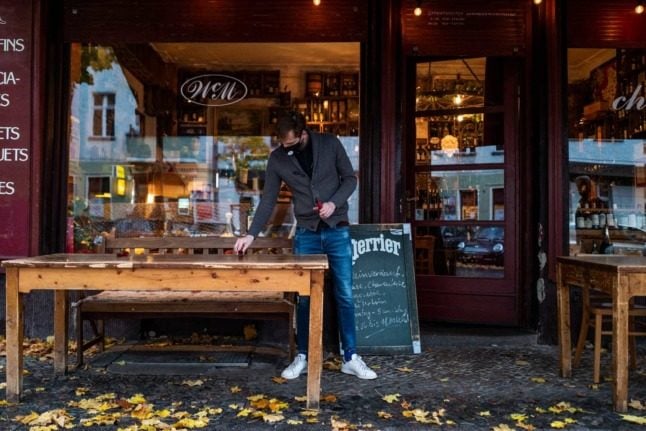 JOBS
EXPLAINED: How the minimum wage will increase in Germany in 2022
Url copied to clipboard!