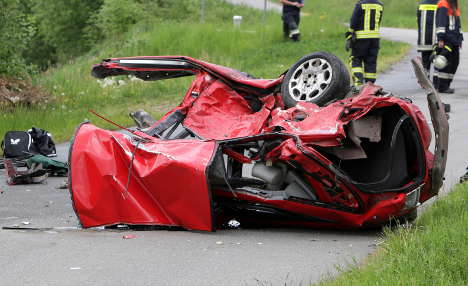 Deadly accidents were all too common on Bundesstraße 22 before the area was 'de-radiated'. File photo: DPA

Willmering is barely more than a village. With a population of just over 2,088, it is an idyll of tranquillity on the eastern outreaches of Germany's wealthiest and – some would say – most eccentric state.

But in 2008 the town, which proudly hosts a life-sized wooden sculpture of the Madonna, was shaken by five deadly road accidents in the space of ten months.

All the accidents happened on the same road, the Bundestraße 22, and all on the same three-kilometre stretch of asphalt.

Werner Vogel, chairman of the town council, told The Local that there was no pattern to the crashes. One happened when a driver overtook another car too quickly and lost control of his vehicle, another when a women did not see an oncoming car when crossing the road.

“Some of the crashes were caused by reckless driving, others by carelessness, but they were all different,” he explained.

Imposing a speed limit also was not an option, nor was banning overtaking. Because the road crossed state lines, its control lay on the federal level and the federal police were unwilling to take such measures.

Thinking outside the box

So the town council met to see if they could come up with a different solution.

“Nobody had an idea what we could do. Then Herr Gebert approached us to offer his services.”

Helmut Gebert was living in the area at the time and had a somewhat unusual explanation for the series of accidents. His theory was that radiation caused by underground water channels was negatively affecting drivers as they drove over that specific section of road, temporarily distracting them.

For a price of €1,800 he promised to counteract the harmful influence this radiation was having on car owners and pedestrians alike.

The town council was split. But in the end a majority decided to go for Gebert's proposal.

“The was no universal acceptance of it, but the council decided we could afford the money and it wouldn’t make Willmering poor to spend €1,800,” Vogel said.

So Gebert instructed the councillors to hang wooden boxes from three trees on the boundary of the road.

In these boxes he placed three circular white dishes with metal poles sticking up from the centre. The devices remain there to this day.

“Since then there have been no more accidents,” Vogel confirms.

But he concedes that he has no idea what exactly the devices do.

“There is no scientific explanation for them. Scientists would say it’s nonsense.”

He himself is dubious, admitting he personally believes it is “more likely to be coincidence” that the accidents have stopped.

The town also has not made any contingency plans for the eventuality that the devices might break or could need replacing further down the line.

Gebert has since moved away, but luckily his new home is only 10 kilometres down the road.

“He is still reachable if need be,” Vogel reassures.

Gebert explained to The Local that his devices neutralise the “left turn of the water radiation” which conflicts with the “rightward motion of our bodies' inner cycles.”

Everything that turns right is healthy, but illness and other negative things develop out of radiation that turns left,” he said.

The underground water reservoirs which pass under the road in the afflicted spot give off left turning radiation, he believes.

“This is then strengthened to an unquantifiable extent by radiation being omitted by mobile phone masts”.

Gebert says he has also had interest in the devices from a neighbouring village, but no concrete offer has yet been made. Meanwhile he is convinced dozens of other roads in Bavaria could have their safety record improved through his work.

Bavaria has a reputation for eccentricity among the wider German public, fuelled by the fact it has its own political party, the CSU, whose contributions to German governance sometimes seem like they belong to a different century.

But a spokesperson for the Bavarian Interior and Traffic Ministry assured The Local that employing miracle workers to solve traffic accidents “is no Bavarian idiosyncrasy.”

Leaving no doubt as to his opinion that such methods are not effective means of avoiding road deaths, the spokesperson said “the police, in cooperation with the local community, review a number of measures when dealing with traffic accident, including establishing speed limits.”

“Employing miracle workers does not belong to the spectrum of these measures.”