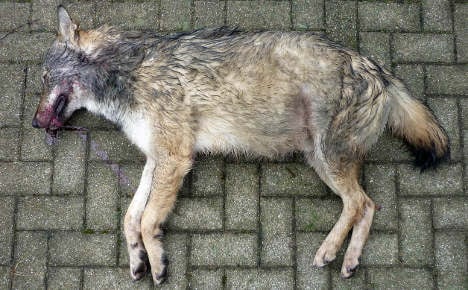 According to initial analysis by experts, the wolf in question is a young male, the agriculture ministry in Stuttgart said.

“Two discoveries of dead wolves in a short time, first in Baden then in Württemberg, make it clear that we can expect more wolves to come here. Baden-Württemberg is prepared for more wolves,” said Baden-Württemberg’s minister for natural protection Alexander Bonde on Monday.

“Contrary to what fairy tales will have you believe, wolves are shy and do not pose a danger to humans. Farm animals also aren’t their primary prey,” he added.

The dead animal was found on Thursday in a so-called “wild animal corridor” – specially designated areas of land meant to help wolf and lynx numbers grow throughout the Bundesrepublik.

The grey wolf was hunted to the point of nonexistence in Germany in the 19th century, but in recent years, they have been making a slow return as packs from Poland and Russia enter into the east.

According to Focus, the last wolf to be shot in Württemberg was in 1847 while the last to be hunted in Baden was in 1866.

In June, another wolf was found dead near a motorway in this area. A lynx was also found dead in a similar area in recent years.

Wolves are living in increasing numbers in Germany, usually laying down roots in the east of the country after coming from Poland or the Czech Republic.

This wolf corpse will now be sent to the Institute for Wild Animal Examination in Berlin to determine where it is from. It likely entered the southwestern state from Switzerland or travelled down from eastern Germany.