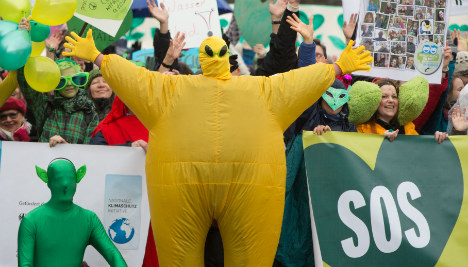 Merkel said that the assembled leaders of almost 150 nations had the chance to send “a collective and very concrete signal… decisive for the future of our planet,” in defiance of the terrorists who had attacked the French capital just two weeks before.

The Chancellor used her few minutes at the podium to reiterate the goal of a maximum of two degrees of warming worldwide that she and other leaders of industrial nations agreed at the G7 meeting in Bavaria earlier this year.

And she made a point of noting Germany's own ambitions, which commit the country to reducing its carbon emissions to just 5 percent of 1990 levels by 2050 as part of the ambitious 'Energiewende' (energy transition) policy Merkel has pushed forward during her time in office.

The country has already developed renewable energy to provide 27 percent of its needs, she said.

But for Germany and other countries to achieve their long-term goals, a “fundamental transformation of our economies” would have to take place, Merkel said.

Industrial nations would not only have to cut their own emissions, the Chancellor added, but also provide the funds and develop the technology to allow developing countries to take a more sustainable path to prosperity.

Merkel, herself a scientist with a doctorate in physical chemistry, is keen to avoid climate goals being sacrificed to short-term political needs in the wake of the conference.

She is pushing for the decisions reached in Paris over the coming days to be checked every five years.

“None of these contributions can be weakened over time – rather, they must be strengthened,” she said.

“Billions of people are placing their hopes on these next days in Paris. Let's do everything so that we don't disappoint them,” she concluded.