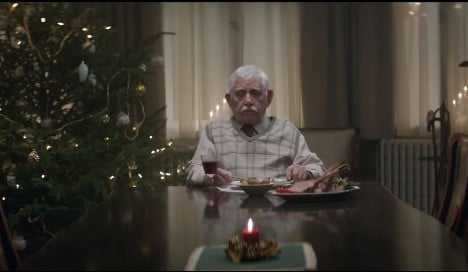 The commercial opens with an old man coming home with his dog to hear a voicemail from his daughter, explaining that she and her kids can't make it for Christmas this year. Viewers then watch as it seems the old man eats Christmas dinner by himself year after year.

What finally brings the family together is meant to be a reminder of the sad consequences of not spending enough time with family, using the hashtag #heimkommen – come home.

The commercial, posted on YouTube on Saturday, had already been viewed nearly 4.5 million times by Monday morning, and seemed to garner an emotional response on Twitter around the world.

The commercial has already been touted by some as better than certain British chains like John Lewis and Sainsbury's, which are known for their holiday season heart-warmers.

“I don't think an advertisement has ever moved me as much as this one. I cried like a baby.”

The ad is a stark contrast to Edeka's previous viral ad campaigns which involved more laughs than tears, like the comical “Supergeil” music video of last year, or the adverts that asked viewers to guess “sushi or orgasm“?

But not everyone found the commercial so touching, with some on social media saying it actually quite misses the mark. Some question whether the video is really moving or rather “tasteless”.

Oh God look at this Edeka clip, this is German attempt at doing a sob story Xmas ad https://t.co/zmJ9eH1P8Q BUT IT'S EVIL AND HILARIOUS

“What is currently stirring the the social media world: The new advert from Edeka. Touching or tasteless?”

A Spanish lottery ad has also tugged at heart strings already at the start of the holiday season, with nearly 3.7 million views over the past two weeks.